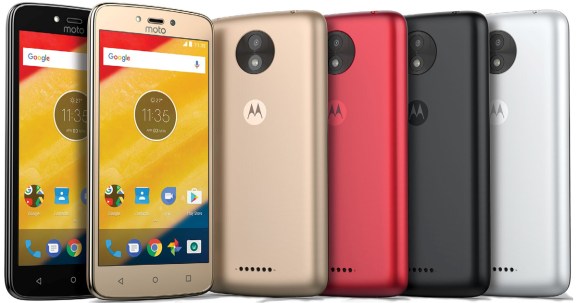 Motorola has gradually been moving downmarket with its new model lines ever since 2013’s Moto X-initiated reboot. First came the Moto G, then the Moto E, and now the Lenovo subsidiary is working on its most affordable handsets ever, according to someone briefed on the company’s plans: the Moto C and Moto C Plus (pictured above).

Like this year’s fifth-generation Moto G5 and G5 Plus, both Android 7.0 Nougat-powered C-series models feature the same size display — 5 inches — and are differentiated by their internal components. For instance, while the regular Moto C offers just an FWVGA resolution of 854 x 480, the C Plus steps it up to 1280 x 720 HD.

What’s more, while the Moto C Plus is strictly a 4G LTE-capable device, the basic C itself will offer two flavors — 3G and 4G — featuring slightly different configurations.

Motorola is said to be going with MediaTek systems-on-chip across the board, all of which are quad-core, ranging from a 32-bit processor clocked at 1.3GHz on the Moto C 3G to a 64-bit version running at the same clock speed on the Moto C Plus. The Moto C 4G, meanwhile, also steps up to 64-bit architecture but operates at a slightly more conservative 1.1GHz.

Further complicating matters, while the C contains 1GB of RAM regardless of version, memory on the C Plus will supposedly vary by region between 1GB and 2GB. Storage-wise, the C Plus has a 16GB internal capacity, while the C contains either 8GB or 16GB, depending on cellular modem and region. All variants should feature microSD expandability, however.

Perhaps the biggest selling point for the Moto C Plus comes in the battery department: While the Moto C sports a 2350mAh capacity, the C Plus nearly doubles that to a hefty 4000mAh.

Finally, the Moto C features a 5-megapixel rear camera with flash (fixed-focus on 3G, auto-focus with 4G), along with a 2-megapixel selfie cam that also has a flash. The Moto C Plus uses the same front-facing camera configuration, but increases the main image sensor’s resolution to 8 megapixels.

Both models will ship in a variety of colors, including black, white, gold, and red.