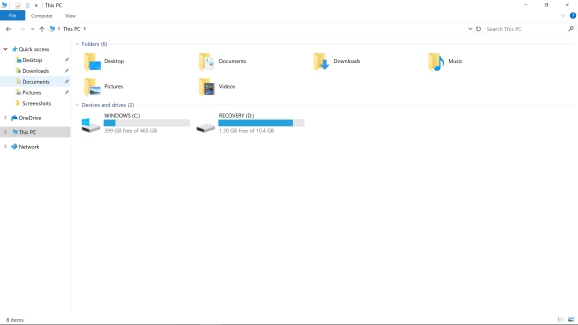 What's missing is a way to open multiple windows here in the File Explorer.

Months after Apple made it possible to open multiple versions of apps (like the Finder) in a single window, Microsoft has begun testing out tabs in Windows apps (such as File Explorer), according to a new report.

Microsoft’s so-called Tabbed Shell feature will work in any Windows app, Windows Central reported today, citing unnamed sources. The blog posted its own mockups for File Explorer and Word to show how the feature might work.

Microsoft declined to comment on the feature, but if you go into the Feedback Hub for Windows Insiders, you’ll see that tabs in File Explorer is the fourth most popular request, behind adding a transparent theme, improving OneDrive storage policy limits, and OneDrive placeholder files. More than 22,000 people have upvoted the feature request, so it would make sense for Microsoft to listen to its customers and deliver the feature for that app alone.

Exposing the feature for any app is another matter, but it would put Microsoft right alongside Apple in another way. Many first- and third-party Mac apps can have multiple tabs open, thanks to the View > Show Tab Bar and Window > Merge All Windows options.

On a Mac, it really is nice to be able to spin up multiple tabs within Chess, Finder, Maps, Terminal, and TextEdit, just like you can in Safari. But you can do no such thing on Windows. Instead, what you get are multiple open File Explorer windows at once. If you’re like me, you hover over the little preview of every File Explorer window to remember which one is which before switching. Tabs really would make things nicer.

We can only hope the feature shows up in whatever comes after the Creators Update.