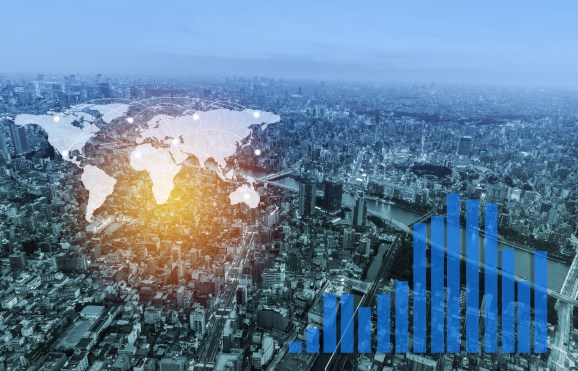 From corporations to startups and governments to organizations, the race is on to tap into the concept of distributed and decentralized trust in order to reduce friction and build more honest, transparent, and efficient frameworks for business and governance.

The U.S. has been somewhat quiet on the blockchain startup front, which has more to do with regulatory issues than a lack of companies that can innovate, and that has resulted in an absence of blockchain buzz in Silicon Valley. Kraken and Coinbase are both in the Bay Area but are cryptocurrency-centric, and there’s a real shortage of U.S.-based blockchain startups working on projects in health, energy, insurance, supply chain, and many of the other verticals that are being explored in other countries.

Although a quarter of all global blockchain companies on Outlier Ventures’ brilliant blockchain tracker are from the U.S., they are mostly cryptocurrency or bitcoin-focused; few are tapping blockchain’s huge potential for non-currency purposes.

New York is the epicenter of the American blockchain community, primarily because the financial industry is scrambling to figure out how to deal with the very real threat it is facing with distributed ledger technology. But New York is also home to a couple of big players outside finance: Consensys is the main player on the global Ethereum stage pushing blockchain beyond banking. And Digital Asset Holdings has raised more than $70 million from 15 of the world’s largest technology and financial firms to build secure and distributed processing tools to speed up settlement, reduce costs, and enhance security and transparency in regulated industries. CEO Blythe Masters, an economist and former executive at JPMorgan Chase, turned down a job to run Barclay’s investment division to build the company.

But overall, the blockchain ecosystem in America is moving slowly. The U.S. Securities and Exchange Commission has put up a major roadblock to innovation by not addressing the new phenomenon of Initial Coin Offerings (ICOs) and providing no regulatory framework for them to exist, thus stagnating U.S. blockchain developments.

While Singapore and Switzerland are starting to swing open the doors as the only two jurisdictions in the world where tokens are treated as an asset and not as a security, the SEC is dragging its heels, which is not good for American innovators who want to raise funds using these unique financial instruments or for Europeans and Asians who want to open up to U.S. investors.

Some European ICOs are even IP-blocking Americans from participating due to the potential legal implications; and that’s not great for American investors. However, American Brock Pierce and his VC team from Blockchain Capital recently decided to take a chance at disrupting their own industry by doing their own ICO — the world’s first KYC AML compliant crowdsale. Pierce raised 20 percent of his firm’s next fund by selling digital tokens to investors last week, pulling in $10 million in six hours.

But it was not easy. He had to incorporate the entity doing the ICO in Singapore and use Regulation S and D exemptions with the SEC in order to raise money from international investors as well as domestic investors. For the U.S., that limited the raise to a mere 99 accredited American investors, while the rest of the world could invest as much as it wanted.

“It’s my belief that in the next 10 or 20 years, no startup in the world will be financed in any way other than as a token,” Pierce told American Banker.

The good news is that at least eight states are working on blockchain legislation promoting the use of bitcoin and blockchain technology, which is promising. But on the federal level, no bills have been submitted.

Canada has an active blockchain startup community mainly due to the fact that Ethereum emanated from the Toronto bitcoin community and there is a cluster of talent centralized in the country’s largest city, starting with Vitalik Buterin, who is the brain behind Ethereum. Not to mention, William Mougayar and Don Tapscott, two of the most prominent authors in the blockchain space are also out of Canada. And unlike the U.S. SEC, which has been quiet, the Canadian Securities Administrators (CSA) have been more proactive by launching a new fintech “sandbox” program aimed at blockchain startups and other firms working with financial technology.

Figuring out what is going on in China is always complicated when you are looking in from the outside. According to Jane Zhang from Skyledger, based in Shanghai, the government is taking a tolerant approach. Zhang, a power player in the Chinese blockchain community says they are smart enough to know the next big thing.

In a recent interview she said that some of the bitcoin exchanges are even lending without a banking license, which, she says, shows the Chinese government is more interested in protecting innovation than anything else.

“The central government is putting massive investment into some of the poorer regions in China and are planning to build blockchain parks to entice some of the top blockchain minds globally to come to China backed with significant funding,” said Zhang. “There are a lot more blockchain startups this year than last year.”

Her own team at Skyledger consists of an elite global group of blockchain developers, many from Eastern Europe, who have moved over to Shanghai to work on her private blockchain platform, which was just chosen by the Dubai government for Customs and Immigration.

The ICO scene is currently unregulated in China with over two million people participating and more and more blockchain startups choosing token sales to raise innovation and growth capital.

“The Chinese government do not see the ICOs as a threat,” Zhang said. “They are actually encouraging them simply by the fact they are not stopping them.”

The Chinese market has seen a flurry of developments over the past year with the formation of consortia such as:

And not to leave out Antipodea, Australia’s Central Bank is conducting internal blockchain research and China behemoth Alibaba is using blockchain to fight China’s fake food, with a supply chain project being trialed in New Zealand and Australia.

Europe in the lead

Europe in many ways has led the blockchain rush. The notable open source culture that permeates the continent lends itself well to the new dynamic of blockchain, and both private and public entities are actively involved in blockchain projects.

And in fact, the majority of ICOs are currenting being conducted by European blockchain startups — many from Eastern Europe.

In terms of blockchain hubs, the main concentrations of startups are in London, Amsterdam, Barcelona, Berlin, and Switzerland’s Cryptovalley.

Estonia’s Guardtime is not only working with its own government to use blockchain for health records but has also contracted with organizations such as NATO. Plus, America’s Nasdaq has reached out to the tiny country in the Baltics to develop applications. Skype cofounder Jaan Tallinn has also kicked off a blockchain startup marketplace based in Estonia called Funderbeam.

The United Kingdom’s chief scientist, Sir Mark Walport, unleashed a massive 88-page blockchain report in January, outlining the potential of blockchain and showing how it can transform the delivery of public services and boost productivity in government. Soon after, GovCoin Systems Limited, a London-headquartered financial technology company, announced blockchain trials to support government aims in streamlining the distribution of welfare benefits.

The Isle of Man government has begun to use a blockchain registry to record which companies on the Isle of Man are active in using the system of distributed online ledgers.

Bank Of England Governor Mark Carney stated earlier this year that the BoE is looking into the policy and technical issues posed by Central Bank Digital Currencies (CBDC) and developing blockchain proof-of-concepts.

The Netherlands’ ING Bank completed a whopping 27 blockchain Proof of Concepts (POCs) by February, and Dutch banking giant Rabobank has also been very active. Global health giant Philips was well ahead of the pack, exploring blockchain for health in early 2016. And the Dutch Central Bank did a full fledged bitcoin clone experiment with something called DNBcoin and is moving forward with more tests.

The Danish Central Bank is even more game with plans to eventually issue blockchain-based E-krone as its reserve currency. And the French Central bank is also testing blockchain.

Sweden is ready to move into land rights with a public-private effort to record land titles on a Blockchain that began in March.

Brussels very recently proposed a blockchain pilot to examine regulatory issues as the executive branch of the European Union wants to create a blockchain proof-of-concept focused on regulation.

Although the legal aspects have not been sorted out at the EU level, Switzerland is forging the way. In April, Swiss regulatory body FINMA announced its supportive position for a new licensing category for financial innovators carrying out some banking activities, but with limited acceptance of client assets and no lending activity. Compared to a full bank, the licensing requirements would be less extensive because the risks are lower and the scope of business is limited.

This is a game changer for ICOs.

Therefore, it’s no wonder that the 30 km vale between Zug and Zurich has been coined Cryptovalley and is considered the center of the blockchain startup ecosystem globally.

Who will move fastest?

The next few years are going to be interesting as blockchain continues to gain traction and creates both threats and opportunities to existing business models. The question is: Who will innovate fastest with this technology? It’s up in the air at this point, but clearly ICOs are going to have an impact on the ecosystem in the short to medium term; and much will depend on the regulators who have the power to freeze or free up the new liquidity being created via ICOs, which will provide the fuel for the next generation of blockchain innovation.

Richard Kastelein publishes Blockchain News and is currently interim Chief Marketing Officer for Blockchain Humanitarian startup Humaniq. He is the founder of ICO design and architecture firm Cryptoalchemy and cofounder of education company Blockchain Partners. Kastelein has advisory roles with ICO-fueled Blockchain startups DECENT and Exscudo, sits on the steering committee of the Blockchain Ecosystem Network, and is involved with Europe’s upcoming ICOs event, CryptoFinancing, in London.