It’s been more than nine months since U.K voters delivered a shock victory for Brexit. But, so far at least, the U.K.’s vibrant startup scene seems to be weathering the turbulence.

According to data from Dealroom.co, U.K.-based startups raised $1.04 billion in venture capital during the first three months of 2017. That’s a slight dip from $1.17 billion for the same period one year ago. But it’s above the amounts raised in each of the last three quarters.

The U.K.’s numbers received a strong boost in the quarter from peer-to-peer lending service Funding Circle, which raised $97 million in VC funding and $43 million in debt funding during the first three months of 2017, according to Dealroom.

For now, the U.K. remains number one in Europe for VC raised, with Germany second at $779 million, and France third at $665 million.

France, however, appears to be attracting more deals for earlier stage companies, though the country is moving toward its own contentious election this weekend, which could alter the country’s economic policies and its relationship with Europe: 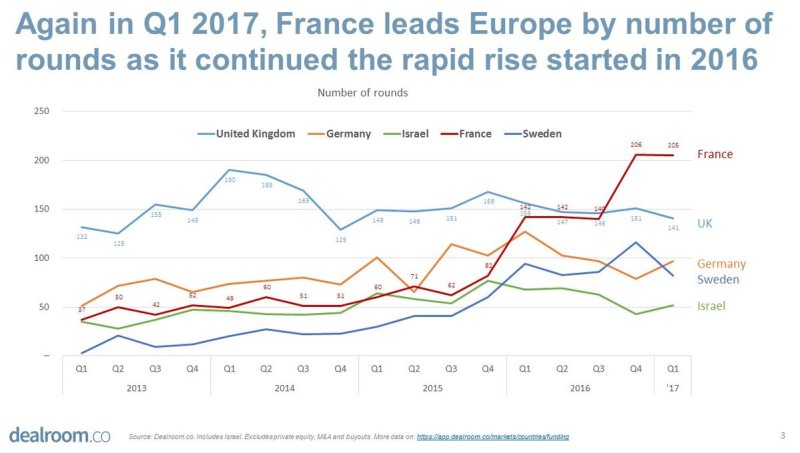 Regarding the U.K., the country only officially triggered the Brexit negotiations at the end of Q1. So it should be interesting to see if the negotiations over its exit from the European Union cause investors to hit pause in the coming months.

At least for now, they seem to be betting that London will remain a critical startup hub for the region, which is good news for U.K. entrepreneurs disappointed over the outcome of the Brexit vote.