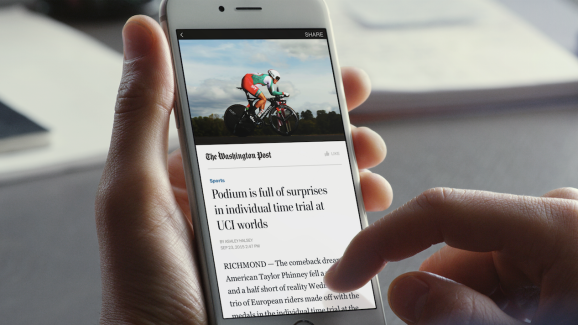 When Facebook launched its Instant Articles feature in 2015, it sounded like a great deal for media companies. All news publishers had to do was hand over the content from their stories, and Facebook’s engineers would magically make those stories look better and load faster on mobile devices.

Not only that, but Facebook promised to help publishers make money from the content they distributed through Instant Articles—they could keep 100% of the advertising revenue for any ads they sold, or take 70% of whatever Facebook sold for them.

Some observers were skeptical of the offer, since Facebook seemed poised to gain more from the deal than media companies ever would. Others recalled how similar efforts aimed at encouraging publishers to distribute their content through the social network — including the similar “social reader” Facebook apps that were popular in 2012 — ultimately fizzled.

At the same time, however, many publishers were desperate to find new ways of reaching readers, and Facebook offered a cheap and easy way to reach more than a billion of them. Some, including the Washington Post, started distributing all of their content through Instant Articles in addition to publishing it on their own websites.

Despite multiple iterations of the product, however, Instant Articles has never really delivered on its initial promise, and many of Facebook’s early partners — including the New York Times and Hearst — have dropped out of the program. Many say they have never been able to generate much revenue from the format, and Facebook hasn’t really helped much.

There’s a big clue to why this happened in a recent piece by tech news site The Verge about Instant Articles and its lack of success. According to a former staffer who worked on the project, the idea that media companies would need to make money from the feature was never really factored into its development by Facebook in any significant way

“The idea that these products could meaningfully impact the revenue of the news industry just didn’t really come up,” the former employee told The Verge’s Casey Newton. “I don’t know that anyone [at Facebook] took that piece all that seriously.”

Senior Facebook executives dispute this in the Verge piece, but it seems clear from the outcome that even if they did consider monetization to be important, the social network didn’t spend nearly enough time on that piece of the puzzle. Why? Because the bottom line was to get media companies to hand over their content, not to make money for them.

Facebook has one overriding mandate, and that is to buy, borrow, or create content that will generate more engagement and time spent on its service. And that takes precedence over just about anything. Facebook’s Fidji Simo told The Verge the site wants to be responsive to the desires of media outlets — but will it do so at the expense of its own well-being? Unlikely.

The giant social network also routinely changes its mind in the process of trying to maximize those goals, and media companies often get caught in the crossfire. That’s what happened with the “social reader” apps, and it arguably happened with Instant Articles as well. The goal posts changed, and therefore so did Facebook’s behavior.

In the case of the social-reader apps, Facebook changed the algorithm to focus more on personal sharing rather than external news stories, and that caused the apps launched by the Washington Post and The Guardian to suddenly crater in terms of audience. Instant Articles were seen as being important right up until Facebook decided to emphasize video on its service, and then they became an afterthought.

As tech analyst Ben Thompson pointed out in a recent edition of his Stratechery newsletter, Facebook was trying to create a three-sided market with Instant Articles, by serving consumers on one side and media companies on the other. But while it created a great product for users, it “completely dropped the ball” when it came to making it a good deal for publishers.

According to The Verge, many publishers have found Google’s competing Accelerated Mobile Pages, or AMP, project to be much more effective for their purposes.

Although some have criticized Google for trying to take too much control over media companies’ content with AMP, it has the benefit of being an open source project that anyone can contribute to. And it also supports the use of subscriptions and paywalls, something Facebook has been slow to incorporate in Instant Articles.