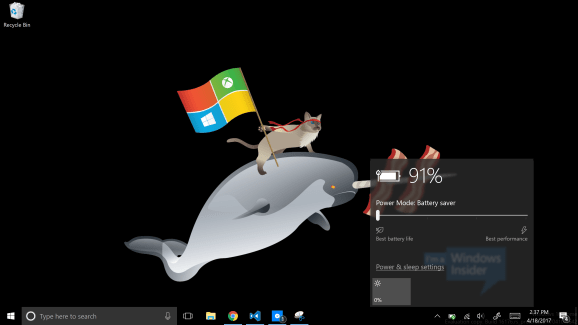 Not only will your Windows 10 PC run certain programs more efficiently, you can also now use a slider to decide whether to run your system at the recommended level, in a way that will preserve its battery life, or in a way that will provide better or the best possible performance.

Microsoft first dropped the slider into a Windows 10 preview in January, but it didn’t actually do anything. Now it’s good for something, so long as your PC has a sixth-generation Intel Core chip or something newer.

You can also adjust battery usage for each app, from Settings > System > Battery and clicking “Battery usage by app,” Bill Karagounis, Microsoft’s director of program management for the Windows Insider Program and OS fundamentals, wrote in a blog post.

“We leveraged modern silicon capabilities to run background work in a power-efficient manner, thereby enhancing battery life significantly while still giving users access to powerful multitasking capabilities of Windows,” Karagounis wrote. “With ‘Power Throttling,’ when background work is running, Windows places the CPU in its most energy efficient operating modes — work gets done, but the minimal possible battery is spent on that work.”

The power throttling feature is in addition to the battery saver feature that arrived in Windows 10 in 2015.

Microsoft is asking Insiders to flag incidents of apps performing poorly with power throttling enabled. The place to report these cases is the new Throttled Applications subcategory within the Power and Battery category of the Feedback Hub.