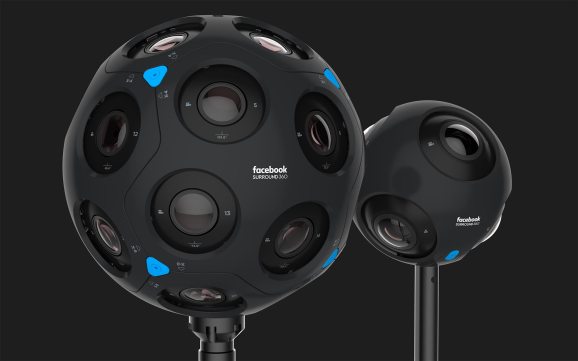 Facebook has introduced two new Surround 360 cameras targeted toward professional filmmakers and content producers. The x24 and x6 are successors to the one the company debuted at last year’s F8 developer conference, but with a major upgrade: It shoots in 6 degrees of freedom (6DoF). This is significant because when the results are viewed in virtual reality, you will be able to move around in ways similar to the offline world instead of seeing a flatter universe.

The x24 contains 24 lenses within a 360-degree frame, while the x6 has only 6. This is because Facebook intends to make the x6 consumer-friendly, something that can be tucked into a backpack. Both cameras are expected to go into production later this year, although Facebook claims no specific time had been set.

“What we did with version one of the [Surround] camera was producing 360 content, but not full-immersion content because tools were hard. You had to hire a specific company to get the equipment, but there’s no time or money to do that,” said Mike Schroepfer, Facebook’s chief technology officer. “We released version one last year and the important part of it is that we open-source the hardware and software. … Some have built clones of the hardware and others have used their own camera, but incorporated the software.”

Even so, he thinks that it’s still not the full virtual reality experience that people expect. “In the real world, you can step and move, and the world moves. At 3D 360, that level of immersion doesn’t happen. It’s not realistic and is sometimes uncomfortable,” he admitted.

According to Schroepfer, some of the best cameras today in the market are limited to standard 360, where you can pan around. You see it now in your News Feed when someone posts a video and you look back and forth using your mouse or moving your phone. It’s also a relatively flat environment. The new Surround 360 provides 6DoF that provides additional capabilities for your viewing experience, such as being able to move up, down, left, right, forward, and backward with pitch, yaw and roll, and see the world adjust accordingly, just like in the real world.

Facebook isn’t alone in working in the 6DoF space, as Lytro has been making strides for at least a couple of years, including launching its own 360 camera called Immerge. Like Facebook, Lytro has been marketing its video camera to filmmakers so they can create lifelike and real-worldly VR films.

There are some differences in both approaches, mainly portability and size. Lytro only rents out its camera, which comes in a single size, while Facebook’s x24 is about the size of a beachball and is more portable. What’s more, Lytro is marketed as more of a premium, professional camera, whereas Facebook is trying to offer something more mainstream, but with the needed power. While the social media company plans on producing these devices in the future, Schroepfer was adamant that the company wasn’t looking to get into the camera business: “We’re trying to make it easier to produce things.”

When asked about the current state of 360 videos, he declined to identify any single pattern to what people have been doing, saying that there are several videos on the social network in 360 with tens of millions of views. “Some are experiential like seeing the Northern Lights. Other things we’re seeing a lot of is content that’s personal to you. It’s one thing to see the Northern Lights, it’s another to see your niece take her first steps and be in the room,” Schroepfer said. “What we’re trying to do is make the best, most immersive technology we can. It’s a professional camera, but how do we get it into the home?”

Like with Lytro, filmmakers using Facebook’s Surround 360 x24 can capture action before running the footage through processing software. Facebook has integrated its technology with authoring and editing tools Adobe, Mettle, Otoy, and Foundry, along with production partners Here Be Dragons, The Mill, Framestore, and Magnopus. The company also stated that it’s been working with DXO to establish a standard for image quality in virtual reality cameras.

After the content has been processed and edited through third-party services, filmmakers and producers are able to upload it to Facebook or Oculus for viewing. Because of their high-quality nature, movies can also be rendered down to play back efficiently on lower-quality devices.

Targeting filmmakers is a prudent move and one that every company seems to be following. Brian Cabral, Facebook’s engineering director, said that it’s to “establish a creative norm. There’s a whole new level you have to develop to shoot. We take for granted that we can shoot in 2D because we have a bazillion images. There’s a whole new set of thirds here. One of the reasons why we want high-end creatives to use it is to teach the rest of us how to use it.”

By open-sourcing its design and soliciting feedback early on, Facebook was able to leverage that knowledge into producing the x24 and x6. “What we’ve heard from production house partners is that to get professional-level cameras in 360-degrees, they’d have to build it themselves,” said Eric Cheng, the head of immersive media at Facebook. “At some point, higher-end cameras are needed to make higher-end content.” Cheng believes what’s needed today is not just a camera that shoots 6DoF, but also captures content that’s relevant to today’s content distribution.

Both cameras were prototyped in Facebook’s Area 404 hardware lab. The x6 version (named so because it’ll contain six lenses), suitable for the consumer, was built completely by the company with parts made on-site. Its larger cousin, the x24, was manufactured by third-party maker FLIR, which incorporated its camera system into Facebook’s architecture.

While Facebook is showing off its new cameras, there’s no firm timetable as to when people will be able to get their hands on either model. Pricing information is also sketchy, but Cabral did say that Facebook is “on its way to a ‘finished product’,” but that there was still work to be done.