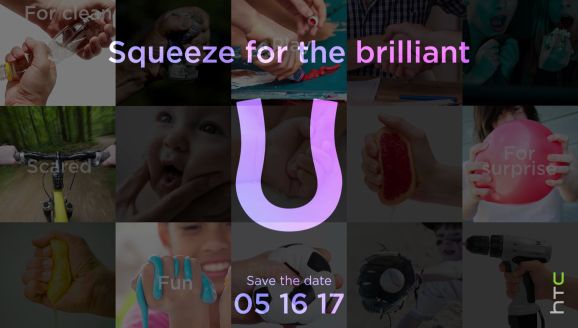 HTC has started teasing its next major smartphone, codenamed Ocean, ahead of a launch event scheduled for May 16. Previously revealed by VentureBeat as likely to hit retail under the branding HTC U, the handset will feature a novel method of input that enables users to control certain functions by swiping or squeezing the sides of the device.

The event will be livestreamed starting at 2 a.m. EDT.

Besides a variety of teaser postings on social media, HTC has published a promotional page for the launch on its site, where a video shows people squeezing various things alongside a countdown timer.

Following the introduction of the first two U-branded phones in January, U Ultra and U Play, this newest model is expected to feature a 5.5-inch WQHD display, powerful Snapdragon 835 chipset, and front and rear cameras capable of 16-megapixel and 12-megapixel image capture, respectively.

It will ship with Android 7.1 preloaded, and skinned with the new HTC Sense 9. The new input method will go by the name Edge Sense.