A world in which on-demand air taxi services permeate the skies above has moved one step closer, as German aviation startup Lilium has announced it has now completed the first flight tests of its electric-powered vertical takeoff and landing (VTOL) jet.

The prototype two-seater Lilium Jet carried out a number of maneuvers in the skies over Germany, and the company now says that it’s working on a bigger five-seat version of the vehicle that it’s touting for use for airborne ride-sharing and on-demand taxi services.

Founded in 2014, Lilium — up until today known as Lilium Aviation — announced a $10.7 million funding round from Skype cofounder Niklas Zennström’s Atomico a few months back, underpinned by a promise to create a world “in which everyone can fly anywhere, anytime.” A central facet of its pitch is that the vehicle takes off and lands vertically — expensive and space-consuming runways aren’t needed — which positions the Lilium Jet as the perfect machine for city-based air transport.

But for its maiden test-flights, runways were of course required. 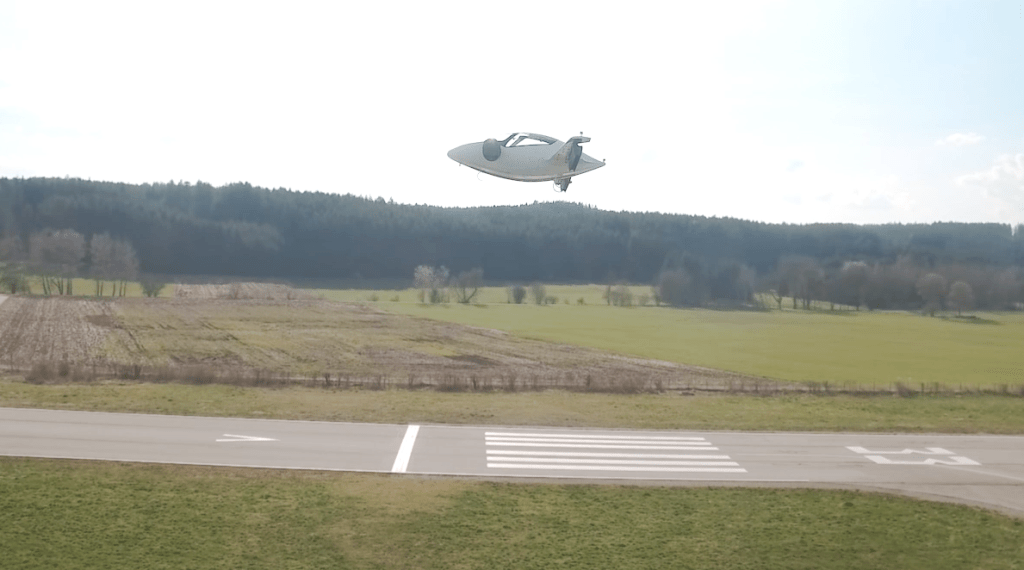 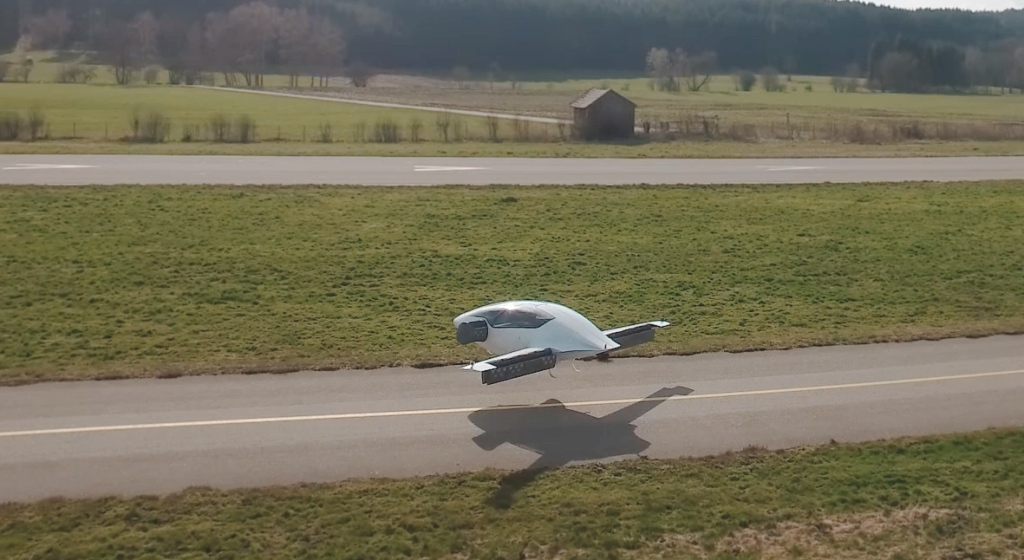 The jet is capable of both VTOL and jet-powered flight, using its wings for lift, like an airplane, which Lilium says means it uses around 90 percent less energy than a drone-style aircraft. At takeoff, the jet’s flaps are positioned downwards to achieve vertical lift, and then once in the air the flaps shift into a horizontal position to gain forward thrust.

The company also says that the electric vehicle can travel 300 km, with a maximum cruising speed of 300 km/h, and its in-flight power consumption per km would be “comparable to an electric car,” according to a company statement.

“Seeing the Lilium Jet take to the sky and performing sophisticated maneuvers with apparent ease is testament to the skill and perseverance of our amazing team,” said Lilium cofounder and CEO Daniel Wiegand. “We have solved some of the toughest engineering challenges in aviation to get to this point. The successful test flight program shows that our groundbreaking technical design works exactly as we envisioned. We can now turn our focus to designing the five-seater production aircraft.”

The Lilium Jet prototype was controlled remotely for the test flight; however, the longer-term vision is to offer a piloted five-seater jet to the public, and much of the technology has been built with that scenario in mind. For instance, Lilium has designed a “Flight Envelope Protection System” that prevents the pilot from performing maneuvers that would “take the aircraft beyond safe flight parameters,” according to a spokesperson for the company.

The legislation and infrastructure required to realize Lilium’s vision of an Uber-style on-demand air taxi service could prove a major obstacle, of course. While the Lilium Jet requires just a small space to take off and land, it’s difficult to envisage a time in the immediate future where cities open their skies to hundreds of these flying machines. But Lilium reckons that cities will evolve to accommodate to the burgeoning personal flying transport industry, in much the same way as some conurbations have adapted to cater to Uber or electric cars.

“Just as our infrastructure is changing today to support electric vehicles, such as charging stations and dedicated parking, etc., many of the potential hurdles have already been overcome conceptually — for example, we already have helipads in our major cities,” a Lilium spokesperson explained to VentureBeat. “In terms of the jet itself, there should not be any new regulatory challenges beyond those governing existing aircraft, such as helicopters and light aircraft. The most significant official process that the jet will have to go through, like all new aircraft, is its certification of airworthiness.”

Of course, the difference between Lilium’s vision and the existing state-of-play involving light aircraft and helicopters is that there could be dozens or hundreds of these mini jets traversing the skies above busy communities at any given time. Lilium’s stated goal is to alleviate road congestion, and for that to happen we would need much more than a few of these machines in the skies at any given time. And that will likely cause local legislators cause for concern, particularly if multiple players enter the mix.

At any rate, Lilium’s vision looks roughly like this computer mockup below, with mini Lilium-branded landing pads either on rooftops or in dedicated parking lot-style areas. 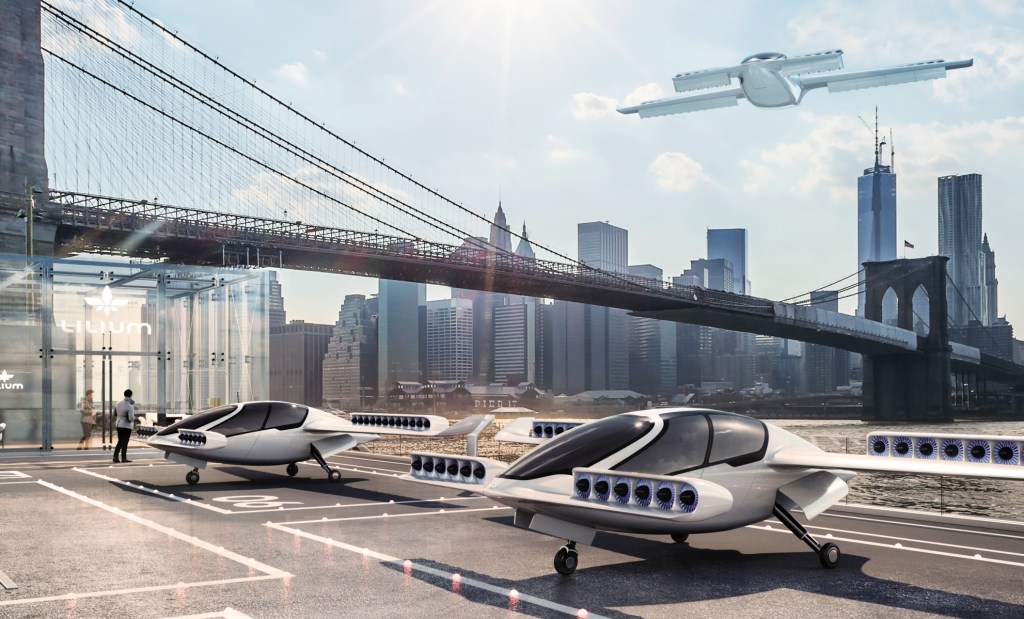 Users would then be able to beckon a Lilium from their smartphone, similar to how they already hail the likes of Uber.

For the record, Lilium reckons that a typical jet journey will be at least five times faster than a car, with a flight from Manhattan to New York’s JFK Airport taking around 5 minutes.

Despite that this is still early stage, and that there will be friction and obstacles en route to realizing bona fide on-demand air taxi services, Lilium is in good company. A number of initiatives around the world help highlight the growing push towards flying cars and other forms of personal air transport.

Massachusetts-based Terrafugia has been working on prototypes of “roadable” aircraft for more than a decade, and it recently won approval from the Federal Aviation Administration (FAA) that opens the road for its unmanned passenger vehicles to hit the skies by 2018. Airbus also recently confirmed plans to test a self-piloted flying car by the end of 2017, with a view toward solving the gridlock that plagues city roads.

Google cofounder Larry Page is also pushing his weight and resources behind two stealth flying car startups. Zee was founded in 2010 with a view toward “designing, building, and testing better ways to get from A to B,” and it’s currently working on a “small, all-electric plane that could take off and land vertically,” according to a Bloomberg report. Additionally, Page is also backing a second, secretive flying car startup known as Kitty Hawk.

Elsewhere, Washington-based Zunum Aero is striving to take aviation into the future with small electric aircraft that use thousands of quieter regional airports to transport people up to 700 miles. And the mighty Uber recently released a whitepaper that looks to a time when on-demand urban air transportation is commonplace, with networks of small electric aircraft taking off and landing vertically. 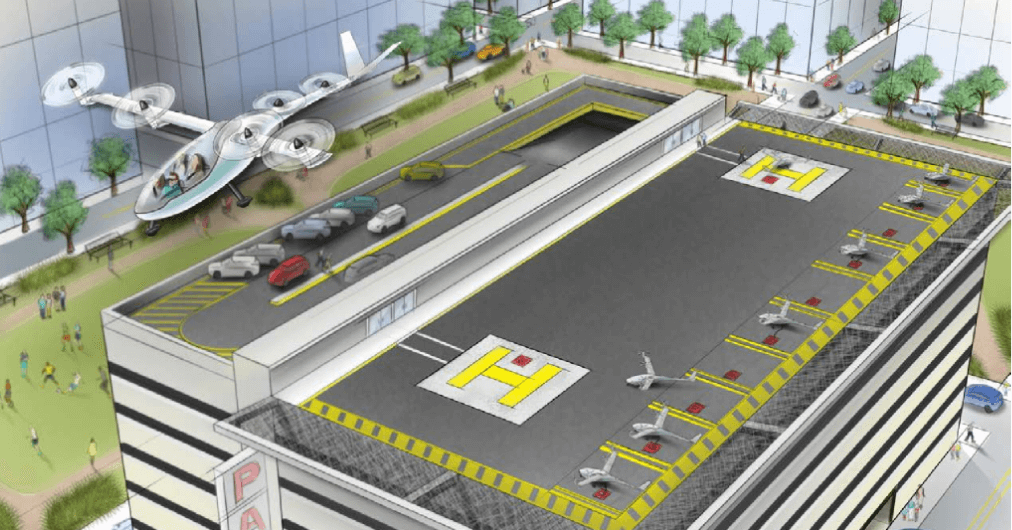 With a number of players emerging in the space, we will likely see some form of flying car or air taxi service in the future. Lilium predicts that by 2025 you’ll be able to hail a ride on a Lilium Jet on-demand.