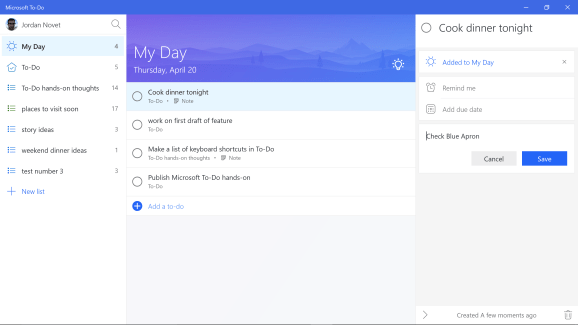 Yesterday, while the tech world was paying attention to Facebook’s many F8 announcements, Microsoft launched its replacement for Wunderlist, the task management app it acquired in 2015. To-Do, as it’s called, is available in preview on the web, Windows, Android, and iOS; you can give it a test-drive with a Microsoft account.

The good news is, the departure from the good old Wunderlist user interface is refreshingly simple. And the app does generally store your tasks and sync them across devices, just as you’d expect it to. Also, it is nice that you won’t need to have a separate login to use the app, unlike Wunderlist. There’s even offline support.

But early reviews for the app suggest that for some people Wunderlist was just fine. You know, if it ain’t broken, don’t release a separate but similar app. Yet here we are: Microsoft To-Do (codenamed Project Cheshire), symbolized by a thick blue checkmark. (Microsoft says the name and icon might change.)

The top review in the Google Play Store at the moment has Wunderlist and To-Do user Steve Kunzer saying he’s going to stick with the former for now:

A really smooth, simple to-do list app. If you want a simple task list, it’s good. But… If you want any features more than very basic and simple, look elsewhere. I guess it will improve with time as they incorporate Wunderlist features, but I wont be using it until they do. I’m a Wunderlist user and it’s so much better, this doesn’t even compare. If it doesn’t incorporate sub-tasks and attachments, as a start, it’s useless to me.

Very simple so fine as a basic to do list, but why not use the brilliant Wunderlist instead? I think Microsoft should focus on integrating Wunderlist with its systems instead of trying to develop their own version. BTW, if MS kill Wunderlist I shall be furious!!!! And then use Trello instead of this.

The biggest issue seems to be that To-Do doesn’t do everything that Wunderlist does. Here are some of the missing features I’m talking about:

Of course, there are other tools you can use to keep to-do lists, including Asana, Cortana Reminders, Google Tasks, Remember the Milk, Todoist, Wrike, and my personal favorite, Atlassian’s Trello. But the issue here is how much people love Wunderlist. Microsoft went through similar troubles when it started moving things from the Sunrise calendar app it acquired into Outlook’s calendar. Similarly, Microsoft closed down Acompli after taking its smart features and putting them in Outlook.

Fortunately, there is one part of To-Do that makes it worth checking out: “Intelligent Suggestions.” Accessible from the app’s My Day list — look for the light bulb icon — Intelligent Suggestions highlights just a few tasks that you can do, so you won’t be overwhelmed with every little thing in every little list. It forces you to get stuff done, one thing at a time. Hit the More button at the bottom and you’ll be shown additional tasks, but maybe don’t worry about that. Just do one thing.

Over time, Microsoft will kill Wunderlist — but only after it’s “confident that we have incorporate the best of Wunderlist into To-Do,” as general manager Ori Artman put it. (List sharing, integrations, a Mac app, and Android and iOS tablet support are coming, he wrote.) Those words might be reassuring to some people, but really time will tell if To-Do actually turns out to be as good as Wunderlist has been all these years.

* While we’re talking user interface, a nice touch with the Seattle space needle, Microsoft, but it’s no substitute for Berlin’s Fernsehturm. Also, the “pleeeenk!” sound you hear when you mark a task as done in Wunderlist is way more satisfying than the “pleuurrr!” sound in To-Do for iOS. Just my $0.02, of course.