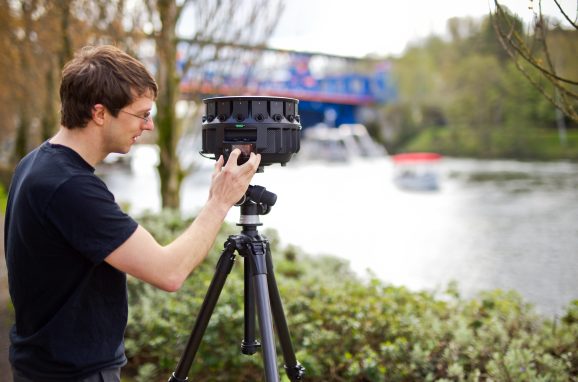 Google today is announcing the launch of the second generation Jump camera rig for recording videos that are suitable for virtual reality (VR). One camera on the 17-camera system is situated on the top, enabling video capture from below, instead of just a 360-degree horizontal landscape.

The new rig is called the Yi Halo, from the Chinese camera company Yi Technology, and it will cost $17,000 when it comes out this summer. The first-generation model, GoPro’s Odyssey, had 16 cameras and cost $15,000.

The Halo can capture 8K by 8K stereoscopic 360-degree VR footage at 30 frames per second (FPS), or 6K by 6K at 60 FPS, Yi chief executive Sean Da told reporters during a media briefing last week. The rig has a companion Android app that serves as a remote control for the camera, which does have a touch display and provides video previews.

After videos are shot, they can be sent to Google’s Jump Assembler cloud service to be stitched together. The Google service now processes 1,000 minutes of footage each week. When the service first launched last year, it returned stitched video in 24 hours; now it happens in eight, Jump product manager Emily Price said.

Google chose to partner with another company instead of building its own camera for a second time, partly because “other companies are much better at building cameras,” said Amit Singh, vice president of business for Google’s VR division.

Facebook, meanwhile, has chosen to build its own camera for two consecutive years, although this year the social network is looking to camera company Flir to build a brawnier 24-camera rig alongside Facebook’s own smaller six-camera system. Kodak, Lytro, and Nokia, among others, have also come out with cameras for VR.