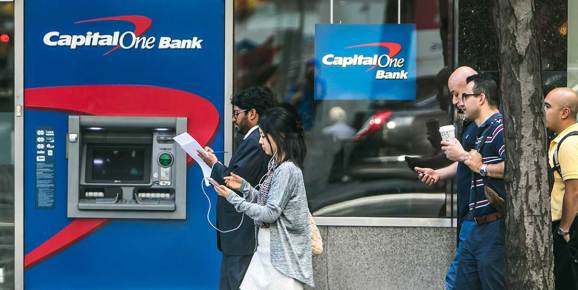 From ATMs and mobile wallets to chatbots and robo-advisors, technology relentlessly transforms how we store, transfer, and manage money. Capital One moves at the forefront of this transformation — one of the largest and among the first banking institutions in the U.S. to make serious investments in digital technology and artificial intelligence.

Several major financial services firms have publicly announced ambitious plans for AI, including consumer-facing chatbots. Months later, they still haven’t shipped. Companies that aren’t core technology organizations like Google or Facebook often struggle with getting tech products out the door. Capital One is one of the few exceptions to the rule.

Capital One’s transition to digital kicked off when the company formed an in-house software engineering unit and migrated a significant part of operations to the cloud, foreseeing early on that agility would become a key competitive edge for players in the financial sector. More recently, the Fortune 500 firm infused both backend infrastructure and customer-facing channels with smart doses of machine learning and natural language processing, punctuated in March by an industry-first rollout of a gender-neutral and NLP-capable chatbot named Eno (“One” spelled backwards).

Capital One’s latest AI-driven initiative is the chatbot Eno, which markedly shifts the medium from voice to text. Ken Dodelin, VP of digital product management, explained, “Texting is the most widely used feature on the smartphone. Ninety-seven percent of smartphone owners text. So we thought that would be a good place for us to spend some time. And we launched the first natural language SMS chatbot from a U.S. bank.

“Through Eno, folks can chat with us in natural language about their credit card accounts and their checking accounts, and we’re able to have that natural language conversation with our customers.”

How do you make a bot safe?

Many chatbots are friendly, fascinating, and harmless, but a few have been used by phishing scam operators to hijack sensitive information. As a highly regulated business, Capital One understands the risks of sharing data with AI and has established specific security protocols to protect customers when they use AI-driven services. Based on the platform, Capital One adopts different approaches to safeguard personal information.

To enable a skill on Alexa, for example, Dodelin says users are first rerouted to the Capital One website to login using their secure username and password. Customers also have the option to set up a personal key for Alexa via a four-digit PIN. This prevents unauthorized individuals from instructing Alexa to divulge sensitive information about other users. Meanwhile, the company’s AI developers programmed a clear limit to Eno’s use cases, which allowed for bill payments but mostly restricted consumer interactions to account information retrievals.

How do you design AI?

Much of the design inputs Capital One considers when building AI-driven solutions come from customer themselves, according to Margaret Mayer, VP of software engineering. For example, the “Second Look” feature added to the CapitalOne Wallet app uses machine learning to proactively alert customers about unusual transactions such as double charging and other non-normative patterns.

“We use analytics in general to look for customer patterns, whether that be spending patterns or concerns about fraud. We’re looking at machine learning in many ways,” Mayer added.

The biggest AI design challenge is context, according to Steph Hay, head of AI design. Hay considers context as the intersection between design and technology. She asked, “In a conversation, what can I learn from and how do I respond to your intents and your emotional state? Is that informed within this conversation in isolation or can we actually look at previous conversations? Could we look at previous behavior in other channels? Beyond that, how do we start making better assumptions and provide smarter responses based on everyone’s data, not just your data?”

For Hay, the challenges seem like a “constant pendulum swing” between using the company’s massive datasets and going to the micro level to understand what’s actually happening in the interaction between a single person and the bank.

How do you nurture a tech team?

While Capital One ranks among the most tech-savvy players in the banking industry, only a fraction of their 43,000+ employees are directly involved in technology. In fact, it took less than 50 of them to build and launch Eno.

One of the key principles binding the tech team is the Agile development framework. “The core group of Design, Product, and Tech work together. What that allows is those conversations that go ‘Hey, I don’t understand this. Please help me understand.’ The teams actually learn together,” Mayer explained.

Mariya Yao is the Head of Research & Design at TOPBOTS, a strategy & research firm for enterprise artificial intelligence and bots.