Singular, a mobile marketing and analytics firm, is today launching a revamped version of its Creative Reporting so that mobile advertisers can see how well their advertisements are working, down to the level of creative assets, such as images or videos.

With Creative Reporting, a mobile marketer could track installs and click-through rates. But they could also track how well the ads are doing in terms of generating revenues over the lifetime of the product. And they could discern which images or videos could lead to long-term engagement.

Singular said the new service is important, as ad channels and marketers are collecting more data on the performance of mobile ad creatives than ever before. Those marketers are optimizing their creative artwork not only for clicks and installs, but also for down-funnel engagement in their customers’ apps.

Above: Singular can tell you which ad image does better.

Singular is the conduit through which marketers access such granular data on the performance of their creatives. With Singular’s new and improved Creating Reporting, marketers can consolidate their creative performance data into one flexible view. They can also access post-install metrics per creative for better optimization. And they can group similar creative art to see which attributes (e.g., 15-second versus 30-second video) and themes (e.g., “product” versus “people”) drive the best performance within a given channel, campaign, or country.

“Up until now, the vast majority of mobile marketers have been living in the dark when it comes to creative optimization,” said Susan Kuo, cofounder and chief operating officer of Singular, in a statement. “Campaign goals are increasingly tied to post-install activity, yet data constraints have forced marketers to rely solely on pre-install metrics like click rates to measure the success of their ad creatives.”

Top marketers and designers at companies like Yelp, Postmates, and Ibotta currently use the tool to make smarter and faster creative optimizations.

“Singular Creative Reporting lets marketers consolidate their creative data and drill down to the deepest levels of granularity so they can take action on crucial creative insights,” said Kuo. “The result: smarter tests, faster optimizations, and higher eCPMs, which can provide huge dividends in user quality and buying efficiency.” 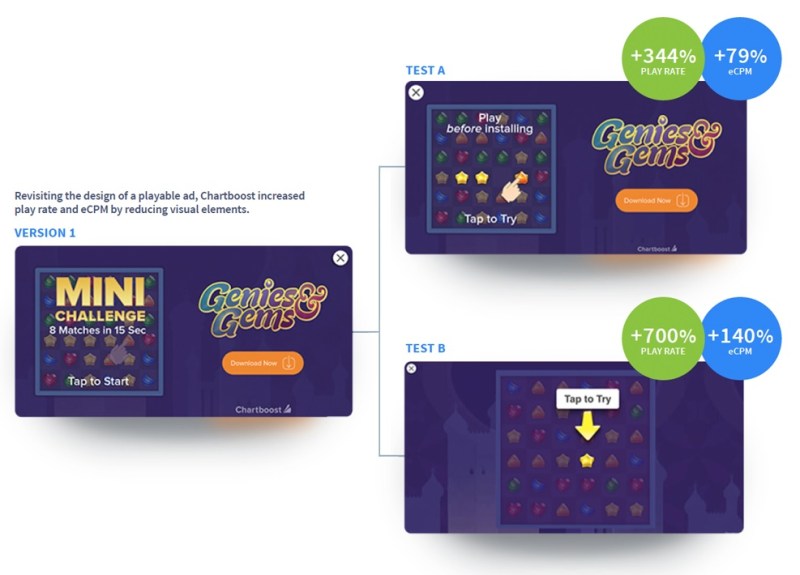 Above: Which ad is best? Singular knows.

“We now know that things like explosions and exciting montages are great for click-through rates, but at the end of the day we’re more interested in discovering the true value of our creatives,” said Shawn Wilhelm, user acquisition manager at Hothead Games. “With Singular, we can dig deeper and understand more valuable down-funnel metrics, such as the LTV of users converted by a particular creative.”

Asked how this is distinguished from the competition, Singular said its Creative Reporting is the first, and currently the only, analytics platform to give mobile marketers access to performance metrics on a creative level.

In order to expose “full-funnel metrics” on a marketer’s ad creatives (e.g., conversion rates, return on investment, cost per event), an analytics service must map spend data to in-app performance metrics on a creative level. Yet because of inconsistencies in naming conventions between ad networks (which report spend data) and attribution providers (which report in-app performance metrics), data needs to be cleaned in order for mappings to occur.

Singular said no one else in the market has been able to achieve the high level of mappings that would enable them to offer a creative reporting tool like Singular’s. Singular is able to achieve high levels of mappings thanks to strong combining in Singular’s data enrichment layer, which matches creative indicators passed by ad networks to indicators in a marketer’s attribution data.

The company also said that marketers often take a creative artwork that has worked in one ad network or in one specific campaign and use that same creative in a different ad network. But that’s not effective, as results can vary substantially based on a bunch of different variables.