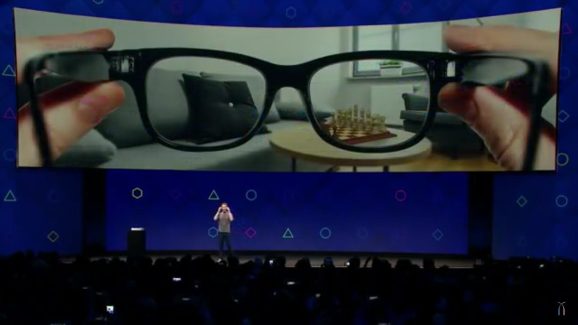 Mark Zuckerberg on stage at f8 -- from the Skinome YouTube video.

Last week at Facebook’s F8 conference, Mark Zuckerberg went all in on augmented reality (AR). Since then his announcement has been praised as a great thing for the AR developer world and panned as an attack on Snapchat. See it here in full:

As a longtime AR developer, I can tell you the announcement didn’t come as a surprise for its content but for the speed and breadth of its potential capabilities: What Facebook announced is a vertically integrated AR development and distribution platform at Facebook scale.

So why does that matter?

Mark made a great point: AR developers have traditionally had to first build a camera and get a lot of people to use it.

When he says “build a camera,” he’s not talking about physical hardware. He’s talking about the software behind the mobile camera that can understand the environment through depth, tracking, and object recognition.

To do that you need a deep understanding of computer vision and machine learning techniques and the ability to optimize those techniques to work on smartphones (or heads-up display systems).

You also need to create applications and tools that draw a lot of users into them and keep those users engaged.

Saying those are hard things is really an understatement, and when we look briefly at what goes into those efforts it’s pretty clear why …

What’s (probably) in the box?

If we analyze for a moment what was introduced during the talk, the technologies that are inside this new platform are probably the following:

Cross platform monocular SLAM. This is what gives you the ability to walk around an object placed in the environment.

Monocular structure from motion. This builds a 3D representation locally of some portions of the real world inside the phone, allowing you to do things like occlusion  (putting virtual things behind real things).

Robust loop closure. When Mark talked about “leaving notes” for others, robust loop closure is what you need to enable that. Effectively it lets the system “remember” where these notes are left simply by looking at the environment.

Object recognition. Understanding what objects are in the real world and then allowing you to give contextual data around them.

Authoring and development tool. This is the biggest piece of the puzzle and would potentially allow anyone to create AR experiences with a very low bar of entry.

For any group of developers, any one of these tasks is monumental but tractable with the right team, funding, and partnerships. But rolling out all of these tasks in a seamless package that can work at scale is nearly impossible.

If Facebook can deliver what it announced at F8, then it will have effectively taken the hardest part out of creating AR experiences: the tough engineering. That’s great for new creators but potentially devastating for anyone who specializes in developing these VERY difficult technologies.

More than likely, Snap, Apple, Android, and Microsoft will follow suit with their own consumer mobile AR developer platforms.

Mark is wrong, though, that “no one has built [an AR platform for developers] yet.” Metaio did, Layar did, we at Pair have. But what he was getting at is right: No single AR platform has captured a significant portion of the market and stayed independent. It takes tens of millions of dollars in development and distribution to do that  —  and even if you have it, timing is everything.

Brands and consumers will flock to FB AR

Everyone in the industry feels that AR technologies are going to reshape the consumer experience for nearly everything, and we’ve seen some indications of that happening already. But the Facebook AR platform could supercharge that thesis with rocket fuel.

I have been saying for a long time that smartphone-based AR will beat heads up display AR in the consumer market for the foreseeable future while laying the groundwork for heads-up based AR. It seems Facebook agrees with this.

If Facebook is the primary platform for AR experiences, then Facebook entities are going to be the dominant places where people first experience AR shopping, games, navigation, etc. After all, that is the company’s intention. It’s hard to overstate the pent up demand in commerce for this level of integration, and I expect it will push retailers and brands into AR faster than ever.

Not only that, the information Facebook will get from evaluating a user’s environment visually from AR experiences will outstrip everyone else. It’s well known that Facebook has the best computer vision team on the planet. So retargeting, focusing content, and feeding users ads will become magnitudes more precise and tailored.

That also means it will be increasingly hard to compete with Facebook in the AR and commerce space for any type of interaction or behavior, as the company has a significant first mover advantage and the ability to iterate quickly.

There is one major caveat to all of this, though: These experiences will only be available through Facebook-owned properties. And there will likely be people who don’t want to work with Facebook for personal reasons.

Some critics of this move by Facebook say that it’s a half measure for AR and that it’s a disappointment because it doesn’t do everything the Sci-Fi world told us AR would do. I think that’s a silly way to look at it, and doesn’t take into account the reality of incremental progress,  even though Facebook’s move is a pretty big leap in and of itself.

Even then, it’s well known that Facebook is quietly developing consumer AR glasses. However there is a lot of ground work that needs to be laid to make such a head-mounted display work. Everything from user awareness and social comfort to hardware improvements.

A seamless AR device must have a map of the world around you to effectively enable AR everywhere. If Facebook is successful with its mobile AR platform rollout, it will be able to bootstrap this map through mobile AR usage and use its robust loop closure system to provide a seamless experience by the time its glasses launch.

This is the biggest potential advantage Facebook has right now, and it shouldn’t be taken lightly. The company has more opportunity to own this market than anyone else.

Facebook and the AR community still have a lot to do to prove that people will buy into the AR ecosystem for commerce, entertainment, and productivity at the billion user scale.

The company is grabbing low hanging fruit by helping developers create and users interact with the popular “lenses” effect.

That’s a low threshold and easy to get into for most people. Certainly not far behind, however, are all of the applications that go beyond silly things and into productivity, commerce, navigation, health, and entertainment.

New opportunities in the AR market

While some may think the number of billion dollar startup opportunities in AR is going to shrink as a result, I think the opposite. What has traditionally been a fairly wide-open playing field (which has scared corporate and venture money to date) is now one where there is serious competition, validating the model.

New opportunities for studios and publishing will sprout from this announcement, meaning that content creators will boom and will inevitably look for other platforms to deploy onto. The pace of innovation for consumer head-mounted displays will increase, and adoption of AR technologies will accelerate. Importantly, 3D content creation will also boom, which enables AR for all kinds of activities.

I’m cautiously optimistic about the impact Facebook AR Studio is going to have on the AR world. While it might have a negative short-term impact on hard AR developers, in the end it will serve as impetus for the AR market as a whole to grow. We should be cautious about one player having dominance in AR and all that goes with it but excited about what such a big move signals across the market.

Andrew Kemendo is founder and CEO at Pair Inc.