About.com, once an online giant providing articles, videos, and more across a range of subjects, is no more. CEO Neil Vogel announced last week that the company was closing the site down on May 2 (today) and would salvage parts of the site to launch a series of niche standalone websites under a completely new umbrella publishing brand. Now we know exactly what this will involve.

Moving forward, About.com will be known as Dotdash, which officially launches today with five media properties under its wing. Four of these were already separate brands under About.com: Verywell, focused on health; The Spruce, focused on the home; The Balance, focused on finance; and Lifewire, focused on technology. With the relaunch as Dotdash, the company is adding a fifth to the mix, ThoughtCo, which is focused on learning. A sixth property, the travel-focused TripSavvy, is scheduled to launch shortly. 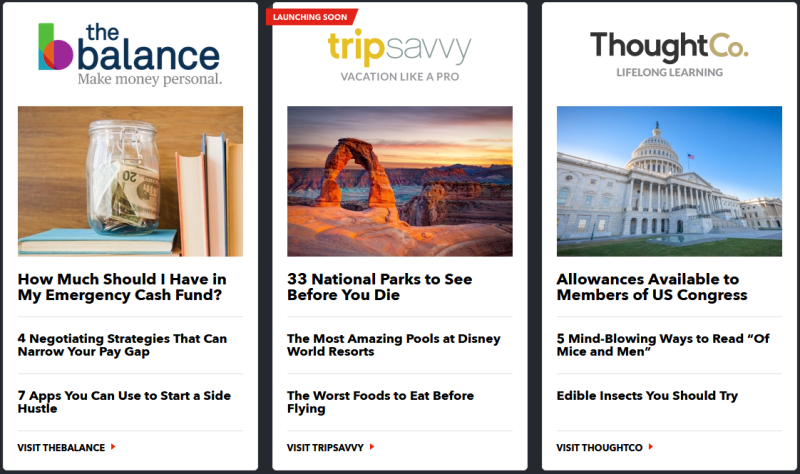 Founded in 1996 as The Mining Company, the original version of the portal went live in 1997. Then the company changed its name to About Inc., and the website domain became About.com two years later. The company changed hands a number of times over the next decade or so, with Primedia snapping it up in 2000 in a deal thought to be worth as much as $700 million, before being sold five years later for $410 million to the New York Times , which in turn sold it to IAC in 2012 for what was thought to be roughly $300 million.

So, what’s with the new branding — why not stick with About.com? Well, it seems clear that if the company is to evolve beyond its roots, which are cemented in the early days of the web, it really has to shake off those legacy shackles.

“Our new name speaks to the remarkable evolution of our business into a world-class premium publisher,” said Vogel, who will remain as CEO at the new publishing firm. “The ‘dot’ in Dotdash is a nod to our 20-year history, as a red dot has always been a part of the About.com visual identity, and the dash suggests forward motion and action.”