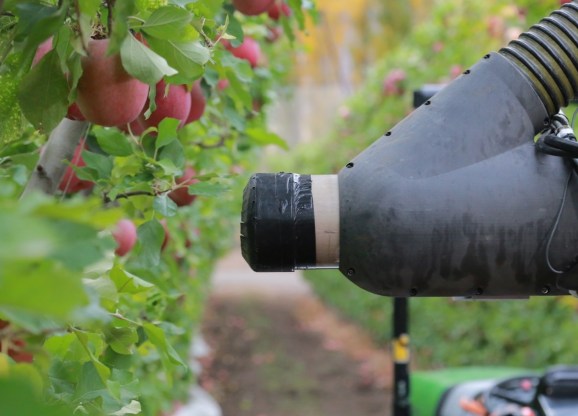 Apple growers generate about $50 billion in revenue globally, yet the apple picking process hasn’t undergone any significant change in the last 100 years, says Abundant Robotic’s cofounder and CEO, Dan Steere. “Today, agricultural workers pick apples wearing a bag with shoulder straps that can weigh between 45 to 60 pounds,” he told VentureBeat in an interview. “And the labor pool of folks that are willing to do this work is shrinking.”

Enter the apple-picking robot. The initial idea sprang out of SRI International, which provided research funding alongside the Washington Tree Fruit Research Commission. Abundant Robotics spun out of SRI in 2016 to begin working on the final prototype.

The robot uses computer vision to recognize ripe apples and a vacuum system to pick them — its arms can reach the top of a tree. “Modern apple orchards use dwarf trees, which are supported by trellis structures that range from 10 to 14 feet tall,” said Steere. Agriculture workers will manage the robot remotely to pick the apples.

Steer claims that although there is a lot of research interest in agricultural automation, Abundant Robotics is currently the only startup tackling this issue on a commercial level. Israel-based FFRobotics, however, is also working on a patented robotic fruit harvester. Broader agricultural automation includes Bosch’s weed-killing robot.

New investors BayWa AG and Tellus Partners joined GV in today’s round. Existing investors Yamaha Motor Company, KPCB Edge, and Comet Labs also participated. Abundant Robotics will use the new capital to commercialize the technology and is targeting next year for the release. Steere would not disclose the price at this point. The startup targets the U.S. market and plans on applying the technology to other fruit-picking industries in the future.

Based in Hayward, California, Abundant Robotics currently has eight employees.