Agolo, a New York-based startup that’s setting out to help companies fight information overload through AI-powered summarizations, has closed a $3.5 million seed round of funding co-led by Microsoft’s corporate investment fund, Microsoft Ventures, and CRV, with participation from Point72 Ventures and Franklin Templeton.

Founded in 2012, Agolo in its original guise was all about helping users curate their Twitter feed to focus on tweets and conversations that were most relevant to their preferences. But that early beta, it seems, was more of a proof of concept, showing how it’s possible to crunch vast swathes of information to zoom in on the data that matters most. And so today Agolo is pitched as the “world’s most advanced summarization software,” connecting news, documents, data, and more to create real-time summaries more quickly. 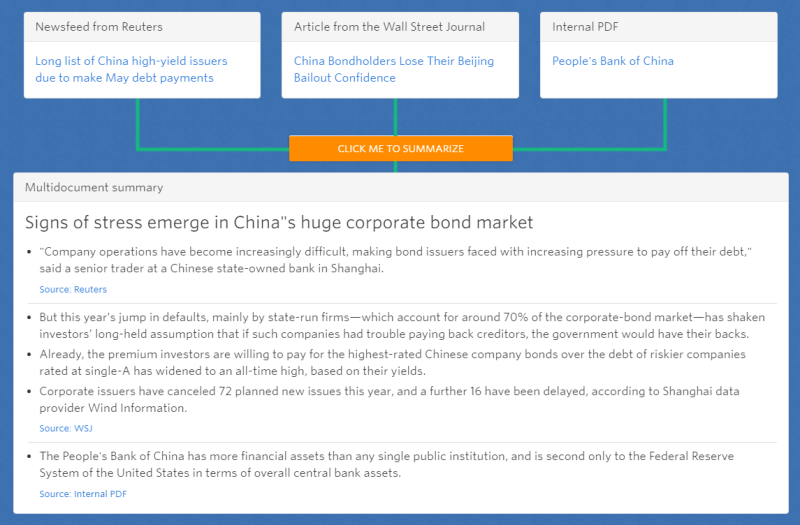 Using natural language processing (NLP), Agolo’s technology analyzes content, identifies different subjects, and draws connections between them. The company said that it already works with “the world’s largest media companies” to help them summarize their news on Facebook and through Amazon’s Alexa voice assistant.

“Summarization is essentially algorithmic reading and writing of content, which is as much a pillar of artificial intelligence as it is of human intelligence,” said Sage Wohns, CEO and cofounder of Agolo. “There’s a crucial need for making sense of the world’s information and Agolo is filling that void. Our platform partnerships with our investors have helped us become indispensable to media companies — it’s hard to find a media company we don’t work with. And there are broader applications in diverse sectors, including financial services.”

Algorithms and AI are increasingly infiltrating the creative realm. Companies similar to Agolo include Automated Insights, which is using automation to analyze big data and transform it into stories, like sports reporting, while Narrative Science focuses on business intelligence for the enterprise, or “data storytelling,” as it puts it, enabling automated earnings reports created from data.

Agolo has raised a number of smaller seed rounds of funding before now, but with its latest cash injection the company said it now plans to “transform the way financial service analysts do their jobs” by expanding its platform to cater to asset managers and investment banks.

“This is game-changing for those whose livelihoods depend on data accuracy and speed to action to make high stakes decisions,” continued Mohamed AlTantawy, CTO and cofounder of Agolo. “Defeating information overload creates a serious advantage for long/short equity analysts. End users receive personalized market and business intelligence reports so they don’t have to spend countless hours reading through the same information.”

Moving forward, Agolo noted that it plans to integrate its summarization smarts into additional platforms, such as Slack, as well as chat, voice, and video.