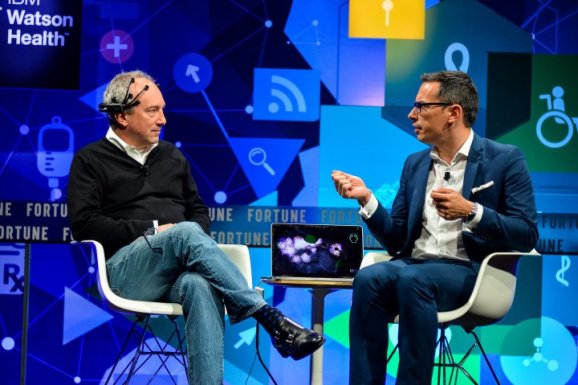 Nothing lights up the brain quite like the rich, lyrical melodies of composer Camille Saint-Saëns’ The Swan, carefully played on a cello.

Noted physician and author David Agus was deep in thought as he listened to a live, solo performance of The Swan at Fortune‘s Brainstorm Health conference in San Diego on Wednesday. But Agus wasn’t merely relaxing. Attached to his head was a high-tech black visor connected to what resembled several mini microphones, each one resting on different parts of his skull. The headset was monitoring the electrical activity of Agus’ brain in real time.

Audience members watched a 3D representation of Agus’ brain respond to the music by way of electrical pulses. Throughout the song, different areas of his brain lit up like a mini-firework display.

Dr. Olivier Oullier, a neuroscientist and former head of global strategy in health care at the World Economic Forum, using a laptop, rotated a graphic of Agus’ brain so people could see each brightly colored pulse form and dissipate. As the song progressed, the pulses seemed to get a little bigger and more dense, resembling tightly packed, multi-colored spider webs.

“My brain loved what you played,” Agus joked to the cellist.

Oullier explained that the headset is a modern version of what academics and researchers have been using for years to study brain activity. What’s different, however, is that the headset costs as much as a video game console as opposed to the older devices that could sell for $100,000. Microsoft’s popular Xbox One sells for $300.

Oullier hopes that physicians will eventually use these headsets, which are far less bulky than their predecessors, to help treat patients with mental disorders. For example, doctors could one day routinely use the headsets to obtain a “quantitative measurement of depression” in patients based on their brains’ electrical activity, Agus said. From that information, they could then prescribe the most accurate dosage of medicine for each patient “almost instantaneously,” he added.

“It is not about being able to read the minds of the patient,” Oullier said about the brain-scanning technology. Rather, the headsets could help doctors understand how the brain’s signals are affected by the drugs.