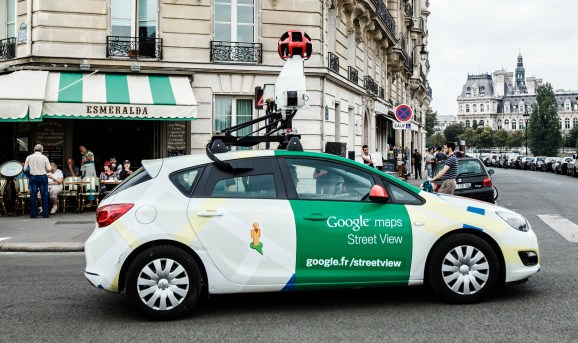 Google has revealed that it’s combining new deep learning smarts with Street View to make it easier to automate the process of mapping new addresses for Google Maps.

Anyone living in a town or major conurbation will likely have seen Google’s Street View cars, replete with 360-degree camera, traversing thoroughfares over the past few years to capture everything from shop facades and monuments to parks and alleyways. While the camera collects imagery of the real word to complement Google Maps, it’s also possible to extract additional information from the photos — including street numbers and names — to improve the data available in Google Maps.

However, numerous factors, such as lighting, angles, distortions, or cluttered backgrounds, can make it difficult for a machine to properly identify names and numbers.

Above: Examples of challenging signs captured by Street View

Over the years, Google has dabbled with a number of methodologies to help improve data captured from Street View imagery, including ReCAPTCHA, which involves human crowdsourcing to help identify the content of an image.

More recently, Google has turned to deep neural networks to automate the process of “reading” the content of images, and its latest algorithm achieves “84.2 percent accuracy on the challenging French Street Name Signs (FSNS) dataset,” according to a blog post. The post adds that it is “significantly outperforming the previous state-of-the-art systems.” Google has made the model publicly available on GitHub through Tensorflow, the open-source machine learning software library developed by Google.

Though Google already uses neural networks in Street View — to obscure car license plates and faces, for example — the company is also using similar methodologies to extract useful information, such as street numbers, which Google says have been used to “improve” location data in one-third of addresses globally. But addresses don’t just consist of numbers, which is why Google has been working to expand the system to include street names, too. The system is also capable of replacing abbreviations with full names (e.g. “Avenida” rather than “Av.”) and ignoring any irrelevant text within the photo.

This automated system enhances the ability to map new streets and add buildings that may not yet have made it onto a city’s official maps. More than that, the same underlying system — using different training data — can also read business names, which further enables it to automatically update new business listings on Google Maps.

So by combining the location data from Street View car’s GPS with address information and business names extracted from imagery, Google could effectively map an entire city without any pre-existing knowledge of the layout or nomenclature.