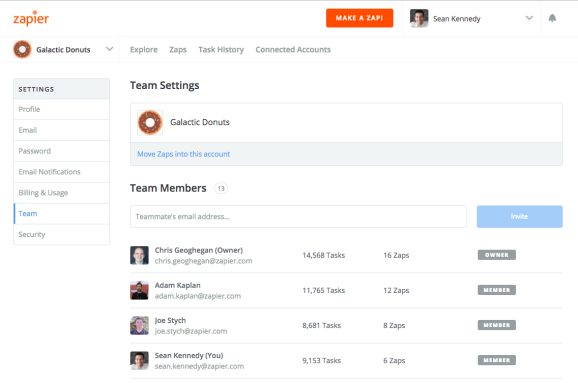 Zapier has set its sights on the enterprise, launching a service that extends accounts beyond individuals to include entire teams. Not only can Zapier’s workflow automation recipes, called “zaps,” be managed by multiple users, the service grants additional administrative controls for IT departments.

The new service is called Zapier for Teams and costs $250 per month, with unlimited users and up to 50,000 zaps per month. Some teams may have had access previously through a beta program, but now it’s widely available.

With more than 1 million users, this IFTTT competitor realized many people were automating tasks for teams through individual accounts. This isn’t an efficient process, and it presented Zapier with an opportunity.

Now anyone can create a team, and the creater — who could be an engineer or someone in IT — is automatically designated the administrator and owner of the account. They then enter the billing information where everything will be charged across the team. Existing zaps can be transferred to the team from individual accounts, and anyone can modify team accounts, even when the original user isn’t around.

Zapier has also added new controls, such as being able to track usage and manage who has access and what zaps are part of the team. The company said additional “team-focused features” are coming soon.