When Danish Dhamani arrived in the U.S. from Tanzania four years ago, he found that he wasn’t a good public speaker. So he set about trying to fix that by going to Toastmasters meetings. There, he learned some tricks to speaking better, and now he and cofounder Paritosh Gupta have turned his experience into an iOS app called Orai that serves as your speech coach.

Orai promises to make anyone become a better public speaker via artificial intelligence. You recite your speech into the app, and it sends the recorded data to the cloud, where the AI analyzes it. Using tips gleaned from the advice that Dhamani heard from Toastmasters, Orai parses the speech for red flags. I think I need to use this before I go on stage at our GamesBeat 2017 event.

For instance, the app tracks the number of “ums” that you utter and points them out to you as unnecessary filler words that are signs of hesitation. It also tells you how clearly you are enunciating words and counts the number of words that you say in a minute, monitoring the pace of your speech. And Orai measures the “energy” of your speech, like whether you speak in a monotone that will put people to sleep or whether you emphasize certain words. 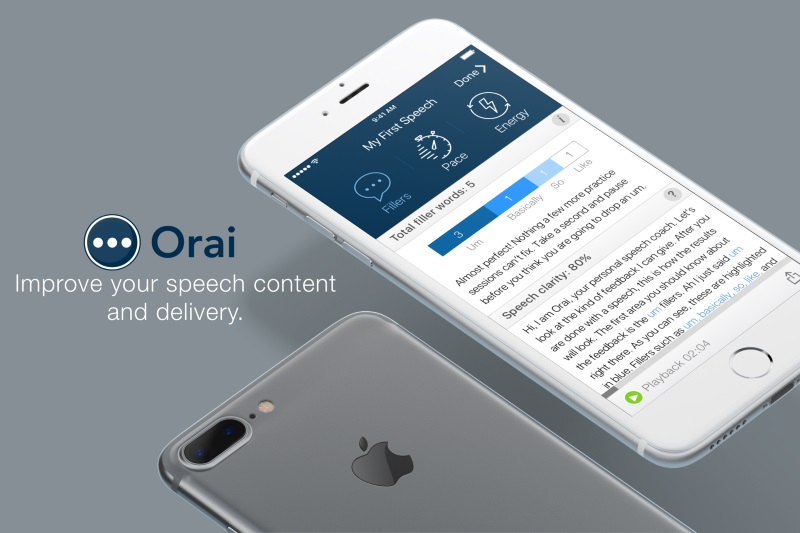 Above: Orai improves your speech skills.

“Some people don’t emphasize the right words or they say ‘um or ah’ or they speak too fast,” Dhamani said. “We’ve used machine learning algorithm and trained it on thousands of talks.”

Much like Toastmasters, Orai offers you a safe environment to practice in, giving you positive reinforcement and practice. The Philadelphia-based company has three people (none of them native English speakers) and is bootstrapped so far. It is currently in the final 12 in the running for the Microsoft Imagine Cup pitch competition. So far, the team has won more than $40,000 in prizes.

Dhamani said that the app has been out for a month on iOS and has more than 1,000 downloads. The team is taking feedback and is planning to add features and other updates. Among the improvements the company wants to deliver: analysis of how you use your hands and non-verbal cues from your facial expressions.

Orai is targeting young professionals, high school students, and college students. It could certainly help immigrants speak more confidently, but it is really targeted at anyone who wants to improve their public speaking skills. Roughly 75 percent of Americans don’t like speaking in public.

“We want you to become a better speaker,” Dhamani said.

The team took about six months to build its first prototype. Rivals include Ummo and Like So. Like So hit No. 4 in paid apps on the App Store, and it is partnered with the National Speech & Debate Association.