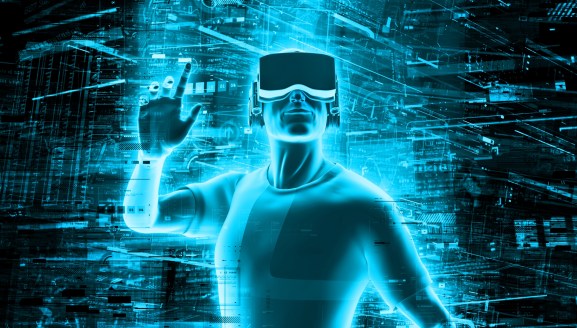 Sitting in a plush, darkened studio lot theater this past week in Hollywood at yet another forum heralding the dawn of the VR ecosystem, I couldn’t help noting how much interest is building in virtual reality and how many more parties are coming to the VR dancehall.

Eighteen months ago, I was part of a private forum of 50 invitees to the same studio, all there to make our pitch in the new VR landscape — and presumably help shed some light for the studio, too. Only then we were in a smaller sound stage, albeit one with a famous pedigree (Star Trek was shot there). There was a good group of potential VR content prospects, too — three different 3D audio technologies, many individual film producers, a few writers, even folks who work in far-flung fields like theme parks. Major VR players like Oculus and Magic Leap sent their strategists, but they didn’t dominate the day.

Last week, the group was much larger and more diverse. Attendees included everyone from Amazon Studios to real estate professionals, reporters, and venture capitalists. Lunch lines were a lot longer, and many traditional media veterans showed up, too, from TV to music, all there to get a sense of what’s cooking in this new space. Even a studio chief and studio owner wandered through, eyeballing demo booths with apparent curiosity.

The event’s central theme was VR content — that corner of the virtual, augmented, and mixed reality world where media content meets platforms and audiences. And it seems to be building with an intensity and focus that is bigger and more forceful than ever. VR is clearly not a content business yet, but that hasn’t deterred Hollywood.

Even at this stage, a few things seem clear:

LA is the center of the world for the new VR content ecosystem. While much of VR’s tech and software are in the Bay Area, content comes from LA. More than ever, LA is ground zero for the new VR content ecosystem. Last year, it was small studios, writers, and filmmakers seeking to learn how to tell VR stories and gear up for VR. This year, Academy Award winning editors, writers, and major league producers are speaking to their plans to create immersive features for the new medium. Major studios are staffing up, too, creating divisions for “What’s Next” and are setting up alongside LA upstarts like Jaunt VR. They want to avoid ceding too much territory to the upstarts as the new medium develops.

Some content producers seem likely to overshoot the runway. Content executives should think and dream big, and some of the content ideas reflect “tent pole” production strategies of major studios. Do virtual reality consumers truly need production values and budgets targeted at building studio franchises? Or will VR’s first big breakout hit come from a completely different creator and angle? My sense is that success will reflect the unique, immersive capabilities of the new virtual reality medium rather than a repurposing of the next Star Wars sequel in VR. Expected next year, Steven Spielberg’s picture Ready Player One might be a helpful watershed event that brings VR to a greater level of awareness and adoption. The story features a VR world, and HTC will be helping Warner Bros. promote the film with film-related VR content.

Major studio executives have VR on the radar, but they’re taking a guarded approach. One spoke of goals to position VR as a “five to 10 year curve” at his studio, arguing that it’s too early to tell what the business will truly look like for years. Others are looking as broadly as they can in the space, perhaps hoping to get arms around what it means for each of their different divisions — theme parks, television, motion pictures, even the mundane day-to-day operations of a studio lot. One major studio executive hinted to me that they want to be out in front of “enterprise” programming, too — a different take on programming that could include corporate training content.

The asset supply chain is not a sexy frontline topic for studios, but eventually studios need to position and prep their assets for the VR and 3D future. This is an investment consideration they will balance against revenue potential and long-term strategy. In 50 years, a studio’s digital catalog will likely look extremely different from today. Whether films are delivered via a mixed reality platform or theaters will still exist, all of the majors will need to prepare for new delivery channels for their assets; VR and 3D objects are just two considerations. Any major studio is unquestionably looking at future investment for its assets.

It’s not all about the film business. Underappreciated areas like location-based entertainment and 3D audio could be vital. We saw simulators on the lot that were major steps up from current simulation experiences in theme parks. Spatial audio is still key to any 360 video headset experience; without spatial audio to track along with the video, you end up with a poor consumer experience and perhaps nausea. These concerns could drive VR and “spatial” audio experiences forward in areas as disparate as theme parks, automobiles, and even humble audio speakers. We saw a couple of VR music networks too, hoping to be the YouTube or Facebook of the new medium for music fans.

It’s still too early to talk business models. Put simply, this media business hasn’t scaled yet, and while there are certainly many VR apps available for purchase, a true media and advertising business is likely years away, at least until advertisers see scale and metrics they can understand. I see one-off brand partnerships as more likely scenarios for VR content producers over the next year. Branded content is more likely to come to the mainstream than VR ad networks, at least for now. While Blippar has struggled mightily, I see the model there — the idea of augmented reality technology being of use to brands, consumer products, and retailers — as a likelier scenario than robust VR advertising networks for the near future.

Game makers still seem like the most sophisticated party at the dance. They start with several legs up, from content expertise, experience driving business models like in-app purchasing, developing on platforms like Unity, and having a broader, more strategic perspective than others. One comment from a game maker cut through most of the dialog at last week’s event: There may come a day when mixed, augmented, and virtual reality platforms blend, and the distinctions between these worlds lessen.

That day may be years off. But in the interim, a lot of parties are circling in wait for the day VR content becomes a business.