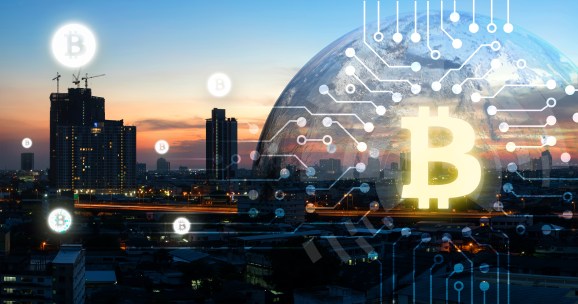 If you’re tired of going to unproductive meetings, commuting in to work just to put in face time, or following commands from a boss you don’t have much confidence in, you may be the right kind of employee for a new type of work environment called a DAO, or Decentralized Autonomous Organization.

We’re in the early stages of seeing these futuristic types of companies roll out already. These early players have run into some missteps, but that’s to be expected. What’s important in the concept of a DAO is the D: “decentralized.”

In a DAO, a blockchain-based organization, you don’t have a boss or a CEO. What you have is a dynamic set of working relationships continuously and dynamically self-organized around outcomes and projects.

To participate in a DAO, you must “buy in”, literally. You need to own a “token” or “coin”, the ownership of which is recorded in the blockchain.

In the future, obtaining these coins will be easier. Today, the most common route is to buy Bitcoin with your dollars, euros, yen, etc. and then use the Bitcoin to buy the tokens or coins of the specific DAOs in which you wish to be a member. Increasingly, you can buy another crypto-currency, Ether (based on the Ethereum blockchain) as your entry point. For many people, Coinbase is the on-ramp of choice to this world from fiat. From there, people go through an exchange like Bittrex or Kraken.

Alternatively, someone who has a coin can send you some.

For example, if you want some IOP (Internet of People) tokens, I can get you some. If you’re willing to do this, you’ve already earned it.

Welcome aboard. Now, you’re in.*

(IOP is just one of many DAOs vying to make an impact. Full disclosure: I own some IOPs).

Once you’re in the DAO, now what?

Now that you are a “member” of the DAO, which is provable to all via the public, open ledger that is a blockchain, your compensation comes in two ways:

The increase in the DAO’s token value comes simply from supply and demand. As the total token supply for each DAO is either fixed or predictably inflationary and it is known to all, the value of the tokens increase along with demand. (A key benefit is that the supply of tokens is not easily subject to future dilution by central administrators such as government officials or incompetent executives. Ah, the power of blockchains!).

While you can buy more tokens or simply sit back and watch/hope that the value of your tokens increases, you can also earn more of them by helping the DAO achieve its objectives.

To understand how that works, there are a few things you need to understand about DAOs vs. traditional organizations.

Unlike a traditional organization, the priorities of a DAO aren’t “set from the top.” There’s no command and control. There’s no boss.

While there may be active members of the community who have identified certain needs, say “a new website” or “a new feature for an application,” it’s not a mandate. No one must do it.

But if a project makes the DAO more valuable, useful, or meaningful for its members and for potential future members, then (and here’s the beauty of it) people WANT to do it.

It’s in their own best interest to do so.

Because the one thing that everyone in the DAO shares is this: Every single person wants the value of the tokens to increase.

So, everyone is hyper-focused on putting as much value into the DAO as possible and, conversely, extremely disinterested in doing anything that doesn’t add value.

And this is where the opportunities abound for people like you.

If you identify an opportunity to add value to the DAO — “Hey, the website is too slow and I can make it more responsive” (for example) — you can submit a Contribution Contract (here’s how you can do it for IOP and for DASH) to the community and make the proposal. You lay out what you are going to do for the DAO and how you think it will add value.

The other existing token holders have an opportunity to vote on your proposal. If your proposal is persuasive in that others believe it is really going to increase the value of the token, then it will pass. If it isn’t, then it will fail.

We can dive into the different forms of DAO governance another time, but for now, let’s assume this voting system works well enough. And let’s assume your proposal passes.

You commit to a set of deliverables over a period and, in return, you are “paid” by the DAO in new tokens at a predefined interval. You may earn 10 tokens every hour or 10 tokens every month. You set the price, others approve it or reject it.

Once you have made a deal with the DAO, it’s in the blockchain. You’re good to go. Your job now is “deliver or have your contract canceled.”

If you don’t deliver, you lose credibility within the community and get perceived as someone who doesn’t add value. You probably won’t have too many opportunities to earn tokens in the future because people won’t vote you in. Reputation matters … a lot.

This makes you hyper-focused on managing your time and efforts.

Which is where the freedom from bad meeting tyranny comes in.

At this point in your DAO relationship you are asking yourself, every moment of every day: “Will this add activity value to the project?”

If no, then you say, “You know, my skills and time are better spent elsewhere.”

And since there are no bosses, you don’t catch any heat.

Sure, there are politics, as is the case with any organization with more than one person, but it’s of a different nature.

In a “traditional” command and control environment, authority determines effort. That’s why your boss can make you go to a bad meeting. In a decentralized environment, value contributed to the project’s success determines influence. That influence determines where efforts should be focused.

Bottom line: Your incentive is to create as much value as you can for the project, based on your skill set and beliefs, not based on what your boss thinks.

We’ve heard the words “radical transformation” or “radical disruption” so many times that it has risen to “boy who cried wolf” levels. I get that. It sounds almost implausible.

But, if you believe (as I clearly do!) that blockchain and decentralized technologies represent a once-in-a-generation type change that, like the Internet, will touch every aspect of our lives, then it isn’t such a far cry to think that the entire way we work will change too.

As Amazon CEO Jeff Bezos famously said, “When I’m 80, am I going to regret leaving Wall Street? No. Will I regret missing a chance to be there at the beginning of the Internet? Yes.”

Make sure you don’t miss the beginning of the DAO era.

*Standard legal disclaimer here. This isn’t an official “giveaway” or promotion. I’m just trying to help. I only have enough for 300 people and will do my best to process them. If you can’t abide by these “rules”, please don’t send me a note.