Through its Nvidia Deep Learning Institute, the chip company will escalate its training by ten-fold (compared to 2016) to help developers prepare for a tech company that in a few short years will be powered by artificial intelligence.

Market researcher IDC estimates that 80 percent of all applications will have an AI component by 2020. The Deep Learning Institute provides developers, data scientists, and researchers with practical training on the use of the latest AI tools and technology. Nvidia, the biggest standalone maker of graphics processing units (GPUs), made the announcement at its GPU Tech conference in San Jose, Calif.

The institute has trained developers around the world at sold-out public events and through onsite training at companies such as Adobe, Alibaba, and SAP; at government research institutions like the U.S. National Institute of Health, National Institute of Science and Technology, and the Barcelona Supercomputing Center; and at institutes of higher learning, such as Temasek Polytechnic Singapore and India Institute of Technology, Bombay.

In addition to instructor-led workshops, developers have on-demand access to training on the latest deep learning technology, using Nvidia software and high-performance Amazon Web Services (AWS) EC2 P2 GPU instances in the cloud. More than 10,000 developers have already been trained by Nvidia on the applied use of deep learning using AWS.

“AI is the defining technology of our generation,” said Greg Estes, vice president of developer programs at Nvidia, in a statement. “To meet overwhelming demand from enterprises, government agencies, and universities, we are dramatically expanding the breadth and depth of our offerings, so developers worldwide can learn how to leverage this transformative technology.” 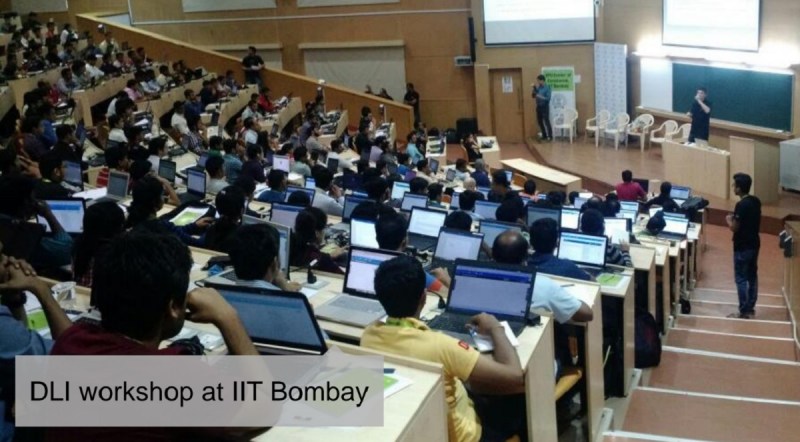 Above: A training session for deep learning in India.

Nvidia is broadening the Deep Learning Institute’s curriculum to include the applied use of deep learning for self-driving cars, health care, web services, robotics, video analytics, and financial services, said Will Ramey, director of developer marketing, in a call with the press.

“The number of training hours per person is increasing, as well as the number of people,” Ramey said. “We are teaching people to apply deep learning to solve the world’s problems.”

Coursework is being delivered online using Nvidia GPUs in the cloud through Amazon Web Services and Google’s Qwiklabs, as well as through instructor-led seminars, workshops, and classes to reach developers across Asia, Europe, and the Americas. Nvidia currently partners with Udacity to offer Deep Learning Institute content for developing self-driving cars.

“There is a real demand for developers who not only understand artificial intelligence, but know how to apply it in commercial applications,” said Christian Plagemann, vice president of content at Udacity, in a statement. “Nvidia is a leader in the application of deep learning technologies, and we’re excited to work closely with their experts to train the next generation of artificial intelligence practitioners.”

Deep Learning Institute hands-on labs are taught by certified expert instructors from Nvidia partner companies and universities. Each lab covers a fundamental tenet of deep learning, such as using AI for object detection or image classification or applying AI to determine the best approach to cancer treatment.

At this week’s GPU Technology Conference, the Deep Learning Institute will offer 14 different labs and train more than 2,000 developers on the applied use of AI. 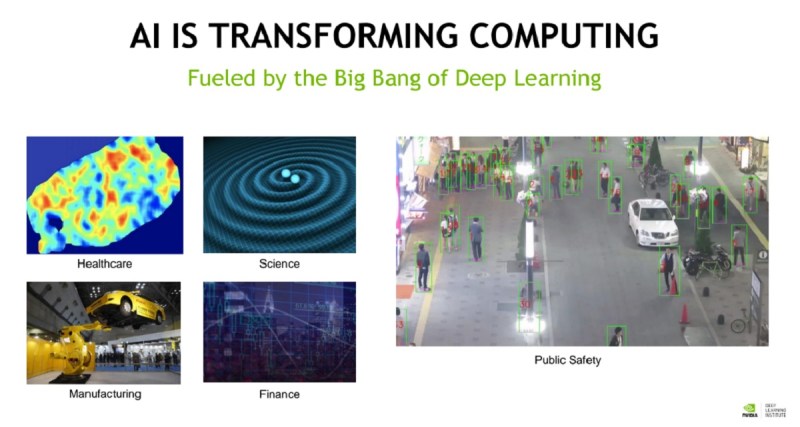 Above: AI is transforming computer science, and deep learning is driving it.