Nvidia‘s GPU Technology Conference is all about highlighting companies using graphics processing units (GPUs) to accelerate artificial intelligence. To juice the ecosystem, Nvidia and its partners tonight gave away $1.5 million in prizes to the winner of the Nvidia Inception Awards for best AI startups.

Nvidia, which had $6.9 billion in revenues last year, counts more than 1,300 AI startups around the world as participants in its Nvidia Inception program. A couple of weeks ago, Nvidia CEO Jen-Hsun Huang hosted a Shark Tank-style event called Nvidia Inception to find the best AI startups. Huang and a panel of judges listened to pitches from 14 AI startups across three categories. 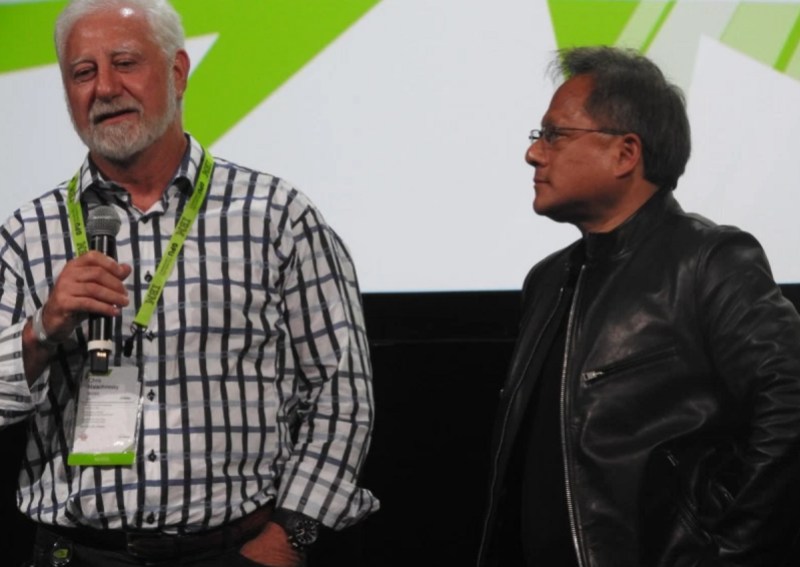 “It’s because of you that we did all this,” Huang said during the ceremony. “We’re an emerging company too. We built a platform. That platform is only as helpful, successful, and valuable as what you do with it.”

He noted that Nvidia started in 1993 at the dawn of 3D graphics on the PC and it almost went out of business three times before going on to become the biggest surviving stand-alone graphics chip company.

“It’s really courageous what you do,” he said. “Being an entrepreneur and a creator, you put your face on that idea. I know exactly how that feels, and hopefully that feeling never leaves you.”

Cofounder Chris Malachowsky said, “We stood on the shoulders of giants. We incrementally improve what is out there. You guys are doing that on top of us. It’s really inspirational, and you will do the same for the next generation.” 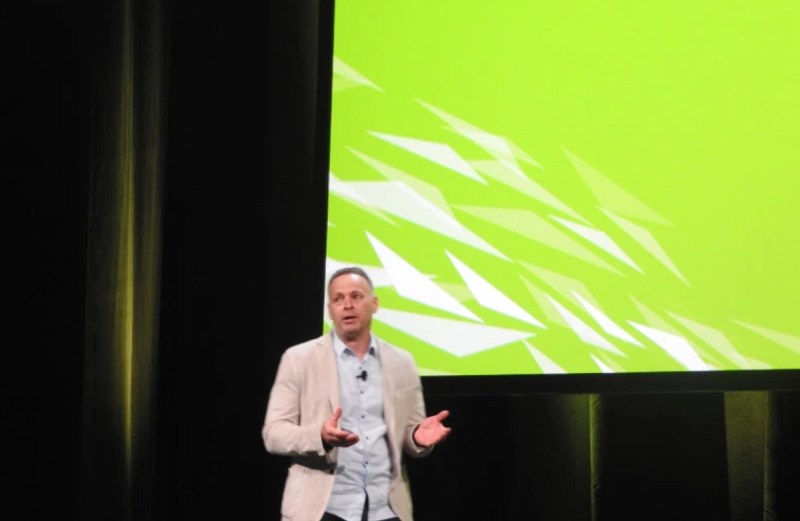 Above: Jeff Herbst, vice president of business development at Nvidia.

Jeff Herbst, vice president of business development at Nvidia, said in an interview with VentureBeat that the company decided to create a meaningful award to recognize the amazing work being done by AI startups. The three awards focus on the “hottest emerging startup,” the “most disruptive startup,” and the startup with the “most potential for social impact.”

I listened to the companies give their pitches to the judges. At the ceremony today, Kimberly Powell, senior director of business development, said it was a big job to filter so many companies.

About 100 startups entered the contest for best social innovation, where healthcare companies rose to the top. The social impact winner, Genetesis, has created a low-cost blood analysis test that uses graphics processing units (GPUs) to discern which chest pain patients are suffering heart attacks and which are not.

Other finalists in the social impact category were Lunit, which uses an AI-based tool to diagnose breast cancer and other diseases; Insilico Medicine, which uses AI for bio drug discovery; Sigtuple, which uses disease screening technologies through data-driven intelligence; and runner-up Bay Labs, which uses ultrasound and AI to make better diagnostic imaging possible. 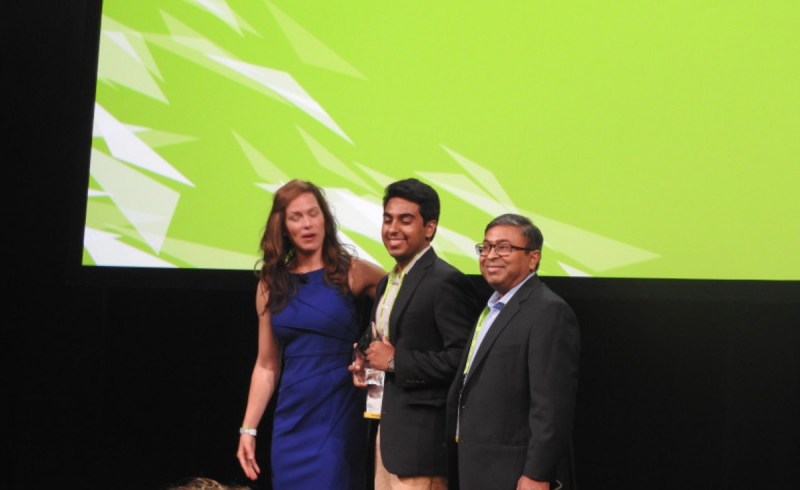 Above: Kimberly Powell of Nvidia and Genetesis cofounders.

“This is really crazy because we started out as your classic dorm room startup,” said Peeyush Shrivastava, CEO of Genetesis, at the ceremony. “We as a company intend to save lives, improve quality, and improve efficiency in the hospital.”

Chest pain results in 10 million visits to the emergency room each year in the U.S. It’s a $6.6 billion a year problem, and the ER has a hard time distinguishing between pain that is cardiac-related and the 75 percent of cases that are not.

The whole process takes hours, and physicians often keep patients under observation for many more hours.

About 5 percent of patients are sent home with an undiagnosed heart problem, and 2 percent die at home. Meanwhile, there is about $494 million in inappropriate stress testing, Shrivastava said.

The company has created a test based on a biomagnetic imaging system that monitors the weak magnetic fields that naturally emanate from the chest. It generates a 3D map of the heart that can tell a doctor whether you are having a heart attack or not. A nurse or technician can evaluate a patient in a non-invasive way in 90 seconds. At the patient’s bedside, the doctor can determine if the patient will need a stent.

“We are taking on the global challenge of chest pain triage in the emergency room,” Shrivastava said.

The system uses GPU-accelerated AI to make the diagnosis, and the biomagnetic imaging can also be applied to other tests on brain, liver, and fetal conditions. The system can create thousands of 3D maps per patient with 1-millimeter resolution.

Genetesis has a data partnership with the Mayo Clinic. The startup was founded in Cincinnati in September 2013 and has about 15 employees. It has raised $1.9 million from Mark Cuban, CincyTech, Wilson Sonsini, Danmar Capital, and 43North. 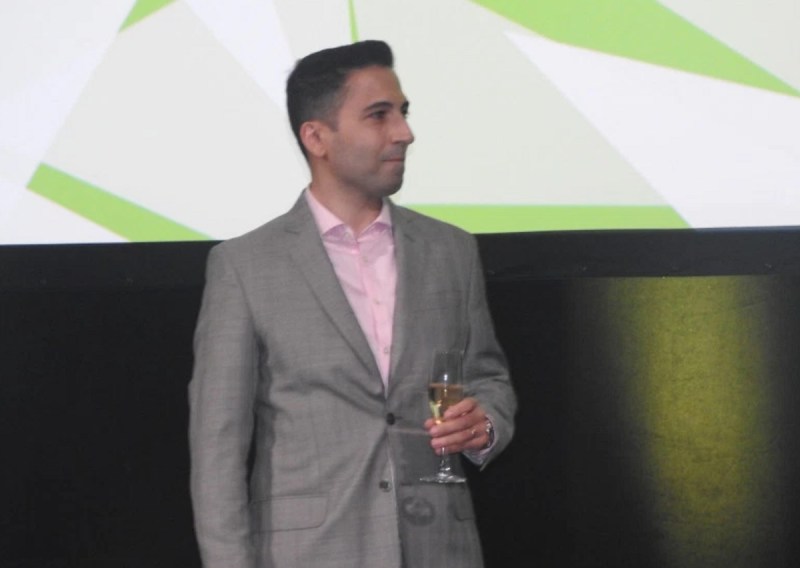 The company spent more than a year creating its software to run on Nvidia’s GPUs, and that turned out to be the smartest decision it made, said chief technology officer Eli David, during the ceremony.

Tel Aviv-based Deep Instinct is applying AI to the task of detecting malware. About 1 million new variants of malware are spread every day. Often, a new family of malware is only about 30 percent different from the code of something that came before. Many antivirus vendors focus on detecting known malware in a library, using reactive technology.

But Deep Instinct believes the better solution is deep learning, which can be used to detect unknown malware in real time. It doesn’t detect virus signatures, sandboxing of content, or heuristics. Instead, it only looks at the binary raw details of the file in question. And Deep Instinct doesn’t require frequent updates, said David. It trains the deep learning neural network on hundreds of millions of files. In short, it focuses on prevention, not reaction.

“We do not wait for the attack execution,” David said. “We protect against malware, anything from simple mutations up to nation-state attacks.”

The company built its own deep learning infrastructure from scratch, as it had to develop its own flavor of neural networks. The software runs efficiently on the combination of central processing units (CPUs) and graphics processing units (GPUs) and Nvidia’s CUDA software for running non-graphics software on graphics chips. The GPUs enable the company to do in a day what would take three months for a CPU.

Deep Instinct prunes 95 percent of the unnecessary processing threads so that it has a much smaller amount of data to analyze. The results are about 99 percent on detection rates, based on independent tests with its customers. By comparison, the competition gets about 80 percent detection.

Deep Instinct has a very low false-positive rate of about 0.1 percent, compared with 2 to 3 percent for a deep-learning rival, David said. And Deep Instinct only has to be updated every few months or so. The company started commercializing its software in 2016, and it expects to generate $10 million in revenue this year.

In 2018, it hopes to add a solution for traffic analysis, and it will expand to all other areas of cybersecurity over time. Rivals include companies like Cylance. Deep Instinct has 65 employes and has raised $50 million from Blumberg Capital, UST Global, CNTP, and Cerracap. The toughest problem is that people don’t understand what is in Deep Instinct’s “black box,” and they want to know how it works. But the company can easily demonstrate how it beats rivals at detecting the same problems, David said, and that usually convinces prospective customers. 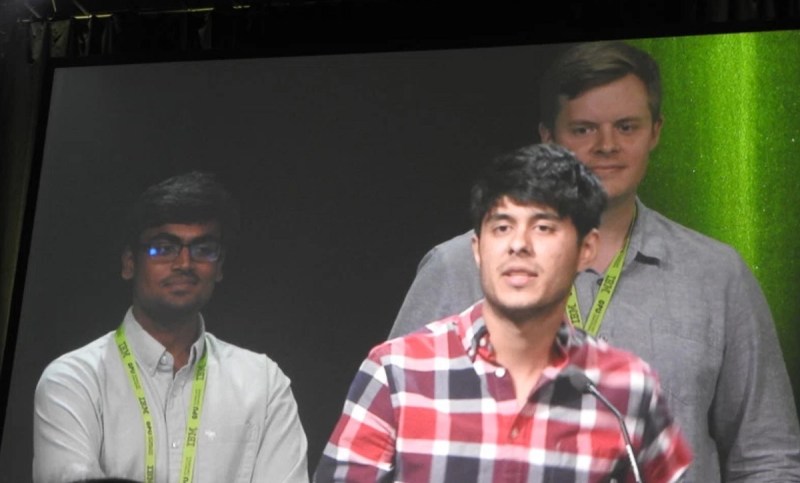 Above: Tanay Tandon, founder of Athelas

Jeff Herbst presented the award for the hottest emerging startup. Besides winner Athelas, the nominees included Deep Gram, which uses deep learning AI to recognize spoken words; Datalogue, which uses AI to clean up data before it has to be analyzed; and runner-up Focal Systems, which is using AI to automate checkout at retail and to help identify out-of-stock items.

Herbst joked that Athelas’ business plan is very similar to that of Theranos, the blood analysis company that crashed and burned in a fraud scandal.

“Try not to be Theranos,” he said as he handed the award to Tanay Tandon, founder of Athelas.

Tandon said that Athelas has made an inexpensive machine that is focused on just one of the most common types of blood tests.

Using computer vision and deep learning algorithms, Athelas has created a machine that looks at a drop of blood and identifies how many white blood cells it has, said Tandon.

Over time, Athelas could expand the testing to other kinds of liquid analysis, such as urine. The company would like to focus on selling a subscription model with a monthly fee for a certain number of tests.