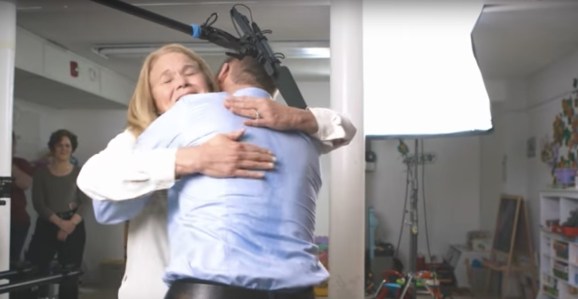 Amazon announced today that it will donate part of its new headquarters in downtown Seattle to a local homeless shelter that was facing the threat of closure.

The company said it would give 47,000 square feet to Mary’s Place Family Shelter, enough for 65 rooms and 200 homeless women, children, and families.

“To have a permanent downtown Seattle location within Amazon is a game-changer for Mary’s Place and the families we serve,” said Marty Hartman, executive director of Mary’s Place, in a press release. “We’ve loved being Amazon’s neighbor, and now the opportunity to move into their headquarters permanently is truly a dream come true. This unique, first-of-its-kind shelter will remind families that they matter and that their community wants to help them succeed.”

It’s hard to argue with the magnanimity of the gesture. So what makes it weird?

Well, the company chose to surprise Hartman in a highly staged setting, surrounded by camera equipment and a microphone designed to capture the emotional moment and then package it later as part of the press release:

A year ago, Amazon let Mary’s set up in an unused hotel that was located on the site of its headquarters. Amazon helped refurbish the building and maintain it. But with the Amazon campus expanding, the building needs to be torn down. The shelter will move into a temporary spot, and then back to the Amazon campus once the permanent facility is finished.

No doubt this upheaval created a lot of uncertainty for Hartman and the community she served. And Amazon’s work here goes far beyond anything I’m aware of being done directly by other major tech companies, though Salesforce, Apple, Facebook, and Google are all contributing to community programs in their own way.

What makes it uncomfortable for me is the Oprah-like surprise that seems obviously designed to create a viral video moment. I am not a particularly religious person at this point, but I do remember the Bible in Matthew 6:1 telling me:

Be careful not to practice your righteousness in front of others to be seen by them. If you do, you will have no reward from your Father in heaven.