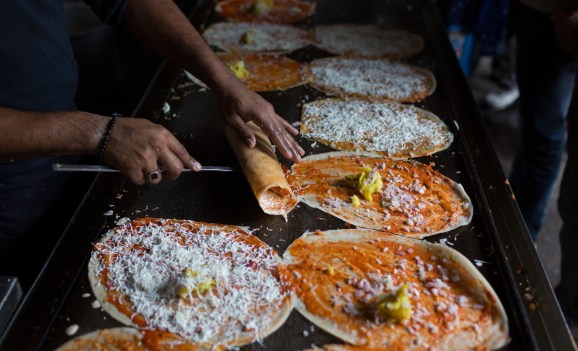 Uber, the San Francisco-based ride-hailing company, finally launched its on-demand food delivery service, UberEATS, in India last week — the fastest-growing market in the world. UberEATS is starting off its operation in Mumbai before expanding to other major Indian cities such as Bengaluru, Hyderabad, Pune, Chennai, and Gurugram.

The company first debuted UberEATS back in 2014 in Los Angeles, and today it has expanded to 71 cities with 40,000 restaurant partners. In India, it currently has 200 restaurants on its platform and allows consumers to schedule orders, curate restaurants, track delivery, and personalize according to dietary preferences. Payment processing will be done via Paytm, which also handles payments for Uber’s ride hailing app. There will be a flat fee of Rs. 15 (23 cents) for delivery and there won’t be any minimum order amount.

The Indian foodtech market has been tumultuous over the last three years. In 2016 the sector received less than $80 million in funding compared to $500 million in 2015. Still, the market grew by 150 percent in terms of order volume amidst the capital crunch, shutdowns, and layoffs. However, there is an inherent problem with the Indian food delivery businesses that are trying to replicate the U.S. model: The average food order value in the U.S. is around $20, about four times more than the average Rs.300 order (around $5) in India. As companies charge a commission of 10-20 percent of the order value and the delivery costs Rs.50 ($0.8), delivery services end up losing money for each successful delivery. So to grow in this market, you need to innovate in tech-enabled operations.

If we look at the current market, Uber will be challenged by other strong players, including Zomato, Swiggy, and Foodpanda. Swiggy has already established itself as a major player, with more than a million app downloads and 25 percent month-on-month growth. Zomato has raised $243.8 million to date with an 81 percent drop in cash burn ($64 to $12 million) and an 80 percent revenue surge ($49 million) in fiscal year 2016-17. Google has also entered the market with its new service Areo, which will deliver food and home services to residents in Bengaluru and Mumbai. It’s also interesting to note that Ola, Uber’s nemesis in the Indian ride-hailing market, shut down its food delivery service Ola Café a year after its launch.

This brings us to the key question: Can Uber take over the Indian market?

UberEATS can apply Uber’s existing technology to connect customers with restaurants and build a unique advantage by bringing three facets of the process (restaurants, delivery partners, and consumers) onto a single platform. Uber can use its bike taxi service, UberMOTO, to sign up anyone with a two-wheeler as a delivery partner. Restaurants will get tremendous value out of this, as Uber will take care of the end-to-end logistics, leaving restaurants to focus completely on preparing food. All of this will operate on top of the solid location-tracking technology that Uber has already mastered. It will allow users to schedule orders and conveniently pinpoint the drop-off locations (from offices to community parks). This is crucial because in India it is difficult to locate the exact delivery point just from an address. I can vouch for this from my first-hand experiences of using some of the top food delivery apps.

Coming to Uber’s current selection of restaurants in Mumbai, it’s quite evident that the curation has been focused on the busiest locations with an aim to tap into office workers and the millennial crowd. Uber will follow that same approach when expanding within the city and to other cities. With a global average delivery time of 35 minutes, UberEATS will most likely do a decent job here as well.

UberEATS has a couple of other advantages over the current food delivery players in the country. It uses a recommendation engine, powered by machine learning, to consider individual taste preferences, previous orders, location, and time to suggest personalized dishes along with suitable restaurants. So if you’re confused about what to eat, the app can make that decision for you. On the restaurant-facing side of the business, UberEATS’ Restaurant Manager tool gives restaurants actionable insights via data analytics to drive growth. This will help their partners gain better understanding of their service quality, customer satisfaction and overall sales so they can make data-driven decisions.

With Uber’s technology and deep pockets, it is certainly prepared to put up a tough fight against any competitor. That said, the Indian food market has its own challenges in terms scaling in areas outside of cities, unit economics, and low connectivity. UberEATS will have to solve the India-specific issues, deploy its technology to help restaurants scale, and at the same time create a habit-forming product for Indian consumers if it wants to dominate the market.

Preetish Panda is head of marketing at Bangalore-based data-as-a-service provider PromptCloud. He is passionate about convergence of technology, marketing, and analytics.