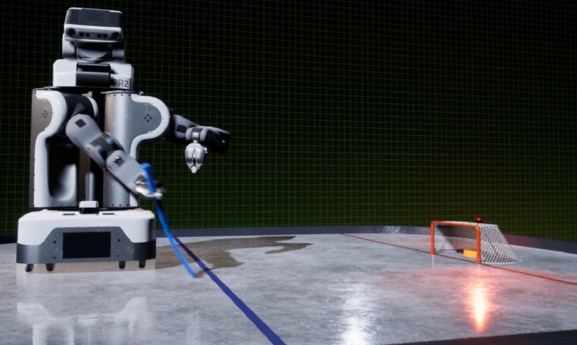 Nvidia's making it easier to make smart robots like Isaac, who can play hockey.

The age of the machines has arrived. Nvidia has announced that it will use the latest advances in artificial intelligence to make it easier for developers to create intelligent robots.

The company showed off the Isaac Robot Simulator today during the keynote speech of Jen-Hsun Huang, CEO of Nvidia, at the GPU Technology Conference in San Jose, California.

The simulator enables robots to be trained in simulated conditions before they’re deployed in the real world. Nvidia provides its Jetson-based reference platform to make it easier to create a smart robot.

Huang introduced Isaac, a robot that could play hockey, and noted how it could use deep learning neural networks to figure out the best way to shoot a puck and then learn over time.

“Robots based on artificial intelligence hold enormous promise for improving our lives, but building and training them has posed significant challenges,” Huang said. “Nvidia is now revolutionizing the robotics industry by applying our deep expertise in simulating the real world so that robots can be trained more precisely, more safely, and more rapidly.”

At GTC, more than 50 companies are showing robots based on Nvidia’s Jetson platform, which enables fast, efficient processing of complex data on edge devices.

The robots are capable of handling such tasks as search and rescue, elder support, and industrial automation of tedious or potentially dangerous tasks.

Working within this virtual environment, developers can set up test scenarios using deep learning training, and then simulate them in minutes. Once a simulation is complete, the information can be quickly transferred to real-world robots. Companies using Jetson reference platforms include Toyota, Teal, Enroute Lab, Starship, Marble, FIRST, and Dispatch.AI.