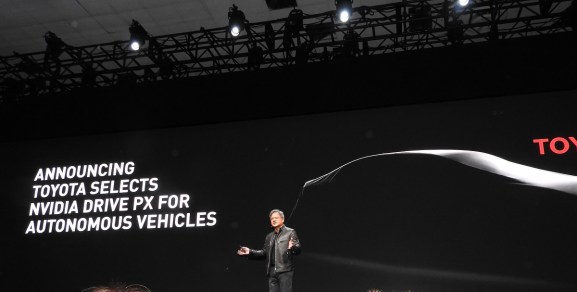 Toyota will use Nvidia chips for self-driving cars.

Those cars will debut in the market in the next few years, Huang said. The Drive PX uses a new processor dubbed Xavier, which can do 30 trillion operations per second in a deep learning application while burning just 30 watts of power. The Toyota deal is a big one since the Japanese car maker is one of the largest in the world.

Nvidia made the announcement at its GPU Technology Conference in San Jose, California. Huang is confident that everything from commercial airliners (Airbus is designing one) to delivery trucks will be automated with a variety of technologies, including full auto pilot, mapping to assist the driver in a co-pilot function, and something called guardian angel. With guardian angel, the car detects hazards around you and warns you of an emergency, like someone else running a red light as you are about to enter an intersection.

Xavier uses a custom ARM64 central processing unit and a 512 Core Volta graphics processing unit (GPU). The chip is designed to be programmable and low power, and it will be able to run the software for self-driving cars, Huang said. Nvidia is open-sourcing the Xavier deep learning architecture software starting in September.

Huang believes both the market and the benefits for self-driving cars will be huge. He notes that we drive about 280 billion miles per year, and that there are 800 million parking spaces for 250 million cars in the U.S. Those parking spots won’t be as necessary in the future, if your car can find a spot for you more efficiently. And it’s not just individual drivers who would benefit: Domino’s, Huang noted, delivers a million pizzas a day.

Nvidia’s partners in the car business include Mercedes, Audi, Bosch, and Tesla.