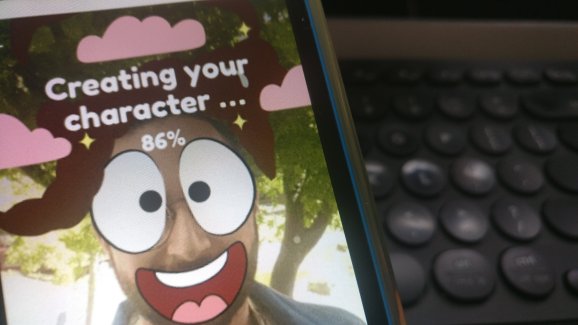 Google is continuing to flex its machine learning muscles today with the rollout of a new auto-illustration feature within its Allo messaging app.

Allo, which debuted last May ahead of its formal launch four months later, is Google’s effort to create a smart messaging app that not only connects you with your friends but also helps you plan events and find information.

As with any messaging app, photos play a pivotal role in Allo’s appeal. And with the rise of selfies, Google is now allowing its users to add a little artistic flair to the mix through computer-generated drawings designed to reflect the person’s general look, with funky customization options thrown in for good measure.

Above: Selfies in Allo

Rather than adopting a standard computer vision approach to replicating photos by analyzing snaps on a pixel-by-pixel basis — which may not garner the best results due to varying poses and lighting conditions — Google said that its new algorithm can pick out features unique to an individual, while working alongside a team of illustrators who create drawings that represent myriad other features, such as hairstyles. Human “raters” were used to train the neural network to match the most suitable illustration with each selfie.

Similar to humanoids that are built to resemble humans but don’t quite make the grade, one of the core underlying issues that Google addresses with its chosen method here is the concept known as uncanny valley — basically, if the illustrations tried too hard to replicate the original picture, the resulting piece of work would likely look weird.

“In the study of aesthetics, a well-known problem is the uncanny valley — the hypothesis that human replicas which appear almost, but not exactly, like real human beings can feel repulsive,” explained Jennifer Daniel, expressions creative director at Allo, in a blog post. “In machine learning, this could be compounded if you were confronted by a computer’s perception of you, versus how you may think of yourself, which can be at odds. Rather than aim to replicate a person’s appearance exactly, pursuing a lower resolution model, like emojis and stickers, allows the team to explore expressive representation by returning an image that is less about reproducing reality and more about breaking the rules of representation.”

Arriving first in the Android version of Allo, with the iOS incarnation to follow, the new illustration selfies build on a growing number of recent projects that blur the lines between human creativity and machines. Last month, Google unveiled AutoDraw as an AI experiment that lets anyone create a super quick drawing based on a simple handmade doodle. The internet giant is also working on research to enable computers to generate sketches that look as though they were created by humans.

Elsewhere, indie artistic app Prisma has proven popular for the way it transforms your snapshots into ultra-realistic pieces of art in seconds, using neural networks to analyze each photo and apply a style chosen by the user.

The initial neural network-infused illustrations rolling out on Allo today are all about “speaking to your sarcastic side,” according to Daniel, but plans are afoot to include different styles to suit different moods or moments. “The next pack might be more cute for those sincere moments,” she said. “Then after that, maybe they’ll turn you into a dog. If emojis broadened the world of communication it’s not hard to imagine how this technology and language evolves. What will be most exciting is listening to what people say with it.”