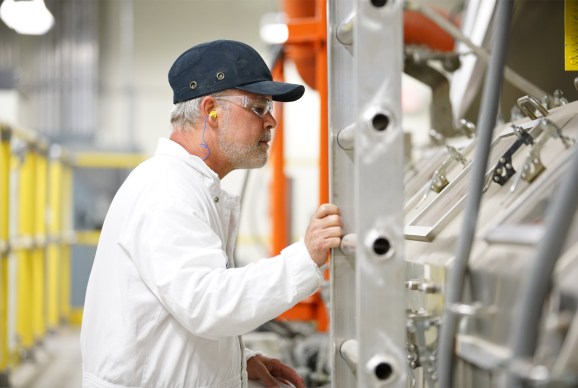 On the heels of its commitment to pump $1 billion into American manufacturing projects, Apple today announced that it had selected long-time partner Corning to receive the first $200 million investment from the new fund.

“Corning is a great example of a supplier that has continued to innovate, and they are one of Apple’s long-standing suppliers,” said Jeff Williams, Apple’s chief operating officer, in a statement. “This partnership started 10 years ago with the very first iPhone, and today every customer that buys an iPhone or iPad anywhere in the world touches glass that was developed in America. We’re extremely proud of our collaboration over the years and we are investing further with Corning, who has such a rich legacy of innovative manufacturing practices.”

The new fund and the Corning announcement come after a year in which Apple and others were criticized by President Trump, who called them out during his campaign for outsourcing manufacturing overseas. In the wake of Trump’s unexpected victory, numerous companies have been searching for ways to respond to his often random and blistering threats about forcing companies to pay higher import taxes.

At first glance, Corning does not seem in desperate need for additional resources. According to securities filings, Corning generated $2.5 billion in cash last year from operations and another $3.7 billion from investments, so it’s not exactly lacking in resources to fund its own R&D.

In an email, Corning spokesman Daniel Collins explained that the companies couldn’t offer many details of the arrangement. However, he did say: “We are collaborating with Apple to develop new glass production capabilities to meet the requirements of their next-generation mobile devices.”

“Corning’s longstanding relationship with Apple has not only led to significant glass innovations that have enabled new capabilities for consumers, it has also helped create nearly 1,000 American jobs and allowed us to continue growing and expanding in the U.S.,” said Wendell P. Weeks, Corning’s chairman, chief executive officer, and president, in the Apple press release. “This investment will ensure our plant in Harrodsburg remains a global center of excellence for glass technology.”

Apple claims it “supports 2 million jobs” in the U.S., including 450,000 at companies that supply it with components. The company says it spent more than $50 billion on 9,000 domestic suppliers.