Analysts and traders are flooded with information on stocks, funds, market volatility, you name it. Accern wants to lend some method to the madness by monitoring news sites, blogs, social networks, and more to curate the most relevant financial content. The New York-based startup announced a $1.2 million seed round today to onboard new customers.

“Right now we’re working with many multibillion dollar hedge funds and banks to consolidate all their existing news subscriptions feeds into a centralized news platform,” wrote Accern cofounder and CEO Kumesh Aroomoogan, in an email to VentureBeat. “We then curate the news using our artificial intelligence technologies to help them find the most relevant stories on stocks they are tracking.” The company says it tracks more than 300 million websites, social networks like Twitter and Tumblr, and SEC filings in real time.

According to Aroomoogan, about a dozen financial institutions are using the platform, typically paying $500 per user per month. Aroomoogan would not disclose customer names but did say there are about 500 active users.

Accern isn’t alone in providing insights on financial news. Although Dataminr is the most obvious competitor, data services like Reuters and Bloomberg could arguably also be considered competitors. But Aroomoogan disagrees. “Bloomberg and Reuters are not competitors but a complimentary news service for Accern,” he wrote. “A lot of firms are already subscribed to these news sites, and we are basically consolidating that data on our platform.” 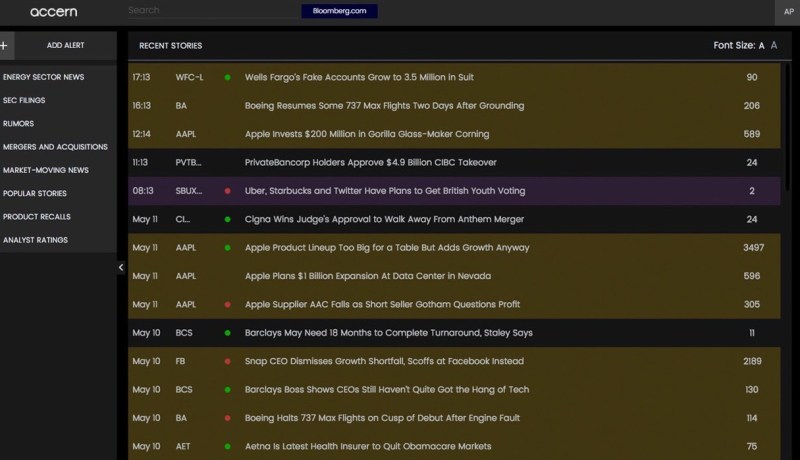 The startup also plans to expand beyond financial services. “We’re looking to build out the platform to help clients understand the buzz around internal controversies,” Aroomoogan wrote. “It would be beneficial for a brand like United, who’s been under fire recently, to streamline all the messaging and reactions around the incidents.” He named IBM as the company’s first non-financial customer but declined to reveal specifics of the deal.

Investors participating in today’s round included Rostra Capital, VYL, Gurtin Ventures, 26 Ventures, Belmont Capital, and Affinity Investment Group, as well as several individual angel investors. Accern will be using the new money to hire more data scientists and engineers and to increase the AI capabilities of its platform to monitor more news.

Founded in 2014, Accern currently has 12 employees.