Google is introducing a handful of updates to its programmatic ad sales platform, AdSense, as the internet giant looks to appease publishers by offering more transparency in how it responds to policy violations.

For the uninitiated, Google AdSense enables online publishers to serve advertisements alongside their content, ads that are targeted to suit the specific theme and audience of any given website. Through the AdSense platform, publishers can customize where ads appear and even block ones that aren’t suitable. Advertising is the cornerstone of Google’s business, but with AdSense in particular it relies on publishers to sign up to receive Google-derived ads on their sites — Google said that it paid out $11 billion to publishers in advertising revenue last year alone.

But AdSense can also lead publishers into contentious situations that may (or may not) violate Google’s various advertising policies.

For advertising to be effective, it has to be positioned beside quality content, which is why Google won’t allow an entire website consisting purely of ads. Also, Google doesn’t allow AdSense code to be placed on pages where there may be pornography, violent imagery, or “racial intolerance,” and it’s also banned from pages that are selling counterfeit goods or displaying content that is copyright protected.

Up until now, if a publisher violated AdSense policies Google would remove all ads from a given website. But moving forward, Google says that it will be able to do so purely on the page that it deems to have violated the policy in question.

“As we roll out page-level policy action as the new default for content violations, we’ll be able to stop showing ads on select pages, while leaving ads up on the rest of a site’s good content,” explained Scott Spencer, director for sustainable ads at Google, in a blog post. “We’ll still use site-level actions but only as needed. And when it’s necessary, such as in the case of egregious or persistent violations, we’ll still terminate publishers.”

This is a good move, because it helps publishers narrow down the cause of the violation — they may not always be aware how they violated a policy and which content was to blame. This is why Google is also rolling out a new policy center in the coming weeks that will serve as a “one-stop-shop” for publishers seeking to learn about specific policy actions in relation to their pages. 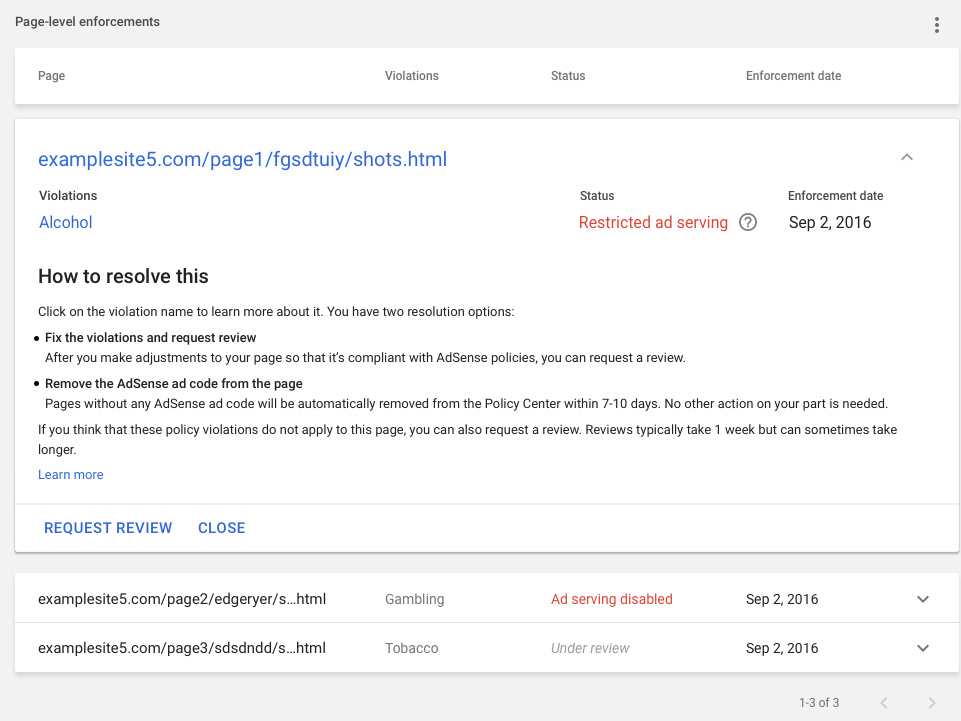 “AdSense publishers will have more transparency about why policy actions were taken and the violations found, including page-level action data, so they can quickly resolve these issues across all their sites and pages using step-by-step instructions,” added Spencer. “The policy center also makes it easy for publishers to tell us when policy issues have been resolved and their pages are ready for review.”

Though programmatic advertising platforms such as AdSense have proven fruitful for advertisers, publishers, and Google itself, the internet giant has been facing a backlash lately over the way controversial ads are displayed on some of its properties. Indeed, the company has been facing mounting criticism for making money from ads that run against videos associated with terrorist groups, a situation that has led a number of major brands to suspend advertising on YouTube.

But with AdSense, publishers do have a decent level of control over what ads appear on their website and what content they appear beside. And Google is now going the extra mile to ensure publishers adhere to its policy guidelines without being punished for accidental missteps.