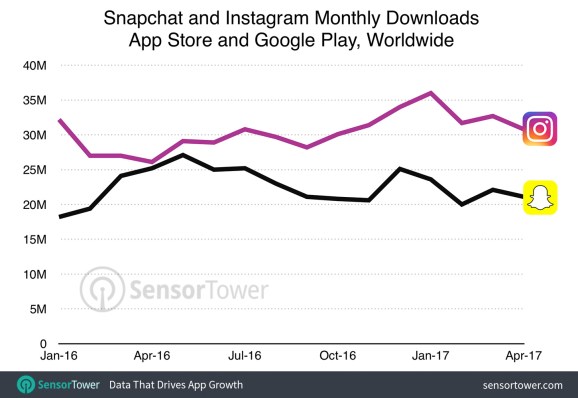 On the heels of a disappointing first earnings report for Snap, a new report indicates the company’s trouble attracting new users deepened at the start of the second quarter.

According to Sensor Tower’s Store Intelligence data, downloads of Snapchat in April 2017 fell about 16 percent year-over-year on the App Store and Google Play combined. That puts the actual downloads for the month at 21.1 million, compared to 25.2 million for April 2016, back when the company was riding a user-growth hot streak.

Sensor Tower said that April installs for Instagram, which has been boasting that its Snapchat-clone Stories has more users, increased 19 percent during the same period. In terms of numbers, Instagram had 31 million installs in April, up from 26.1 million.

That means what had been an approximately 1 million install gap for Instagram last year has grown to about 10 million, with the two apps headed in different directions.

Even worse, Sensor Tower reports that for the first 10 days of May Snapchat downloads fell 28 percent compared to the same period a year ago. Instagram was up 17 percent for that period.

That trend could be devastating for Snap as it faces a huge backlash from investors, who drove the stock down about 20 percent. The company reported revenue for the first quarter that was well below analysts’ expectations, compounded by an increase of only 5 percent in new users since the previous quarter.

In a call with analysts, Snap executives insisted they were not focused on attracting new users, but are rather using “creativity” and “engagement” as their most critical metrics. Still, in their regulatory filings for the first quarter, the company notes that the inability to grow new daily active users is one of its major risk factors.

Snap executives declined to provide guidance, so analysts will be left to make their own best guesses about what is reasonable to expect from the company in the second quarter. But from the reaction last week, it seems investors are not in the mood to give Snap much of a break while it figures out a sustainable business model.