Last August, PK Mishra boarded a Korea-bound plane from San Francisco, along with his co-founder at Fingertips Lab, Ben Park.

After a successful crowdfunding campaign for their in-car Bluetooth controller, Mishra and Park, who spent his early years in Korea, needed a manufacturer that could meet their demands for precision and quality. “The O6 control dial needs to look and feel at home in a luxury car. Most OEMs can’t handle our demands or give us confidence in their manufacturing process. The ones in Korea are a cut above,” Park said.

What’s notable in this story isn’t that Fingertips Lab found an OEM in Korea. Thousands of companies do that each year. It’s that the Korean government paid their team to come to Seoul for three months of expenses-paid acceleration, investor matchmaking and mentoring, as part of a program called the K-Startup Grand Challenge.

In its inaugural year, the government-backed accelerator selected 40 startups looking to expand in Asia. Since then, those companies have secured over $5.5M in local and international investments, signed 30 contracts and 120 MOUs, and filed numerous patents. A striking 70 percent established a legal entity in Korea and 80 percent had a local member join their team during the program.

Fingertips Lab went on to win first place at the program’s demo day, receiving a $100,000 grant and follow-on investment from 500 Startups and local angels. They also opened negotiations with Hyundai Motors, the world’s fourth-largest automaker, along with Korea-based distributors.

Through June 7th, organizers are accepting applications for batch two of the K-Startup Grand Challenge.

Apply for the K-Startup Grand Challenge

This year they’ve expanded the program to include 50 startups and four months of acceleration. Startups selected will receive $12,000 to cover living expenses over four months, plus funding 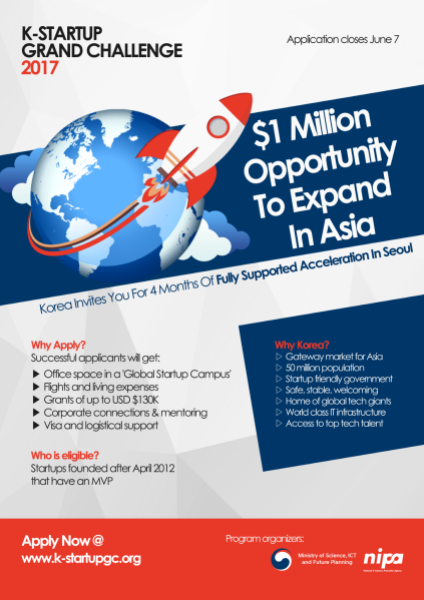 towards round-trip flights to Korea. Non-financial incentives include office space and prototyping facilities in a $160 million startup campus, located within walking distance of many Korean tech giants like Kakao and Naver, and a 14 minute subway ride from Gangnam.

“Our time in Korea was more valuable than I could have guessed,” said Jazz Tan, Founder and CEO of Malaysia-based startup YouthsToday. During her stay in Korea, Tan signed agreements with numerous universities and student organizations, giving her access to more than 600,000 university students in Korea.

This gave YouthsToday, a platform that helps students secure corporate sponsorship for events, its first foothold in a foreign country. “As a startup, we couldn’t have afforded the cost or risk of expansion without the support the Korean government provided,” Tan said. “We were even able to hire a local manager and an intern to look after the business in Korea when I returned to Malaysia.”

Preksh, the runner up at the 2016 Demo Day, registered a patent in Korea for its unique augmented reality solution and are in the process of signing a deal with a major retailer, which serves more than one million shoppers per week. Fourth place winner, Imagga makes a powerful image recognition API. While in Korea they collaborated with KIA Motors and they are still leveraging the network formed during the program to grow their business in Asia.

Nathan Millard, whose company, G3 Partners, is working to support the K-Startup Grand Challenge, has witnessed the development of Korea’s startup ecosystem over the past five years. “When I started working with Korean startups in 2012, there were few signs that Seoul had potential as a regional startup hub. Just a few years later there’s a thriving ecosystem and some great local success cases, in part fueled by support from both the private and public purse,” he explained.

Millard believes that Korea serves as an optimal test market for expansion in Asia, thanks to a confluence of factors. “Korea is safe and stable. Koreans are tech-savvy and open to foreign brands. Korea also provides easy access to over 2 billion potential customers in Asia just a short flight away,” he said. “And did I mention that Korea boasts the among the world’s fastest mobile internet speeds and that 88% of Koreans own a smartphone?”

Korea is also home to global brands like Samsung, LG and Hyundai who have signed on to support K-Startup Grand Challenge. On account of the nation’s manufacturing heritage tech talent is abundant and 64% of Koreans hold a university degree. This presents startups with a fertile recruiting ground. Bloomberg also ranked Korea No. 1 in its annual innovation lists in 2015 and 2016.

Tech startups that are less than five years old and have an MVP (minimum viable product), can apply online for this year’s K-Startup Grand Challenge by June 7. The program kicks off in the fall.