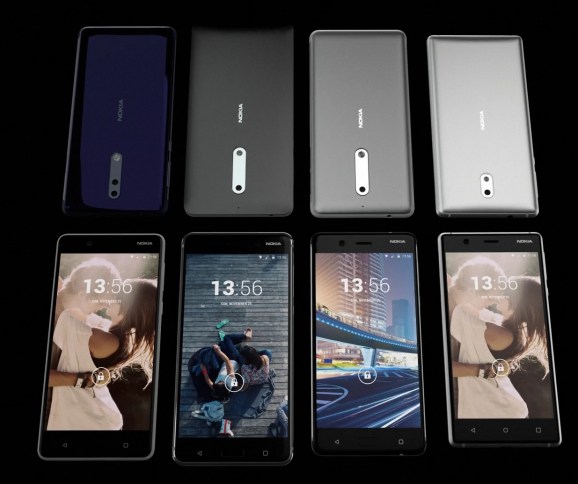 Thanks to a video uploaded to Vimeo that seems to have included more hardware than it should have, we may have gotten our first look at not one, but two unannounced, Nokia-branded smartphones from licensee HMD Global Oy. The video was posted by a longtime Nokia brand photographer who now works with HMD, serving as a very tangible bridge between the storied brand’s past and its present/future.

This will surely get pulled at some point, so I'll mirror it here [source: https://t.co/37yp63CAeC] pic.twitter.com/GktpXnt4pS

In the roughly 30-second clip (seen above), four Android smartphones are shown at various angles before congregating for a group shot near the end. And not only does HMD currently offer just three smartphones, one of those — the Nokia 6 — is not even represented in the quartet. In the image up top, the two handsets on the right are clearly the Nokia 3 and 5, but the two on the left don’t correspond to any known models.

Speculation has been heavy, though, partly because the leftmost device sports dual camera lenses on its backside, suggestive of a high-end, flagship-class phone. This has led some observers to posit that it represents the long-rumored Nokia 9 — which has also been tipped to utilize a pair of primary cameras.

The other mystery handset, to its immediate right, is even more of a puzzle. While it may turn out to be the also-rumored high mid-range Nokia 8, it could also possibly be a slightly lower-spec’ed Nokia 7. Still, based on HMD’s current, simplistic naming scheme, both scenarios would result in a device more upmarket than the current top-of-the-line Nokia 6.

With HMD Global having promised up to seven Android smartphones this calendar year, there’s plenty of reason to suspect that these two unknown devices are somewhere in the near-term pipeline. The fact that the video was quietly removed after gaining some exposure only adds to the likelihood that it features real, unannounced hardware.