As the U.S. becomes acclimated to the reality of a new president, something that’s on the minds of many Americans is the changing economic landscape. People are fearful of the impact automation and technology will have on their livelihoods — it’s estimated that 5 million jobs could be lost by 2020 because of the “fourth industrial revolution,” according to the 2016 World Economic Forum.

Is the solution to all of this simply teaching workers how to code? Obviously not. “Countries will have to invest in transforming their workforce if they want to keep up with the changes and avoid a worse case scenario of ‘talent shortages, mass unemployment, and growing inequality’,” said WEF founder and chairman Klaus Schwab. 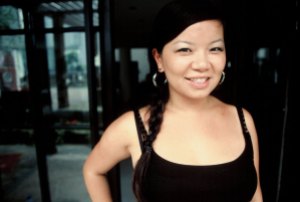 Above: Christine Lu at Barcamp Shanghai in 2009.

Los Angeles-based entrepreneurs Christine Lu, Shuchi Rana, and Bret Blount may have a bold approach to solving this eventual employment crisis in Middle America. The team has created America Innovates, a program aimed at looking beyond Silicon Valley to facilitate new innovation hubs in the U.S. Armed with capital from various investors, including some from China, Lu and her team work with universities, local governments, area businesses, and other parties to establish innovation districts that will benefit the community.

“It’s about how do we steer investments into communities of America while being inclusive?” Lu explained to VentureBeat in an interview.

The program is divided into two parts: an opportunity fund and a platform. The former functions similarly to a venture fund, putting money into innovation districts and the startups that operate within them. America Innovates will create dedicated funds for each city it operates in — Lu said Los Angeles, which is one of the fund’s first markets, will be allocated $25 million. Other cities being considered include Durham, Austin, Denver, and Atlanta.

As for the platform, America Innovates said it is launching next month. The aim is to bring together investors, philanthropists, and companies that are working in health, education, science, and sustainability.

One way to describe the platform is as a combination of AngelList and a Kickstarter for social impact.

“We’re tired of talking about the political climate,” Lu explained. “[It’s about] what we can do to be Americans. Job creation is nonpartisan. Investment into local communities and job creation can be nonpartisan.” An Intuit study estimates that by 2020, more than 40 percent of the U.S. workforce will be made up of freelance workers. The traditional model of employment has changed, and so too must the way business is done. The new workers are innovators, those who spot a problem in the world and believe they have the solution. So how can communities embrace this spirit of innovation instead of forcing entrepreneurs to flee to Silicon Valley, New York City, and other places with well-established hubs of innovation?

America Innovates wants to help Middle America stem the talent drain. It’s not about encouraging a big tech company to set up its headquarters in a city and calling it a day — it’s about steering outside investment into the cities where entrepreneurs and talent are already living. Lu and her team want to facilitate innovation districts, described by the Brookings Institute as areas able to “facilitate the creation and commercialization of new ideas and [support] metropolitan economies by growing jobs in ways that leverage their distinct economic attributes.” 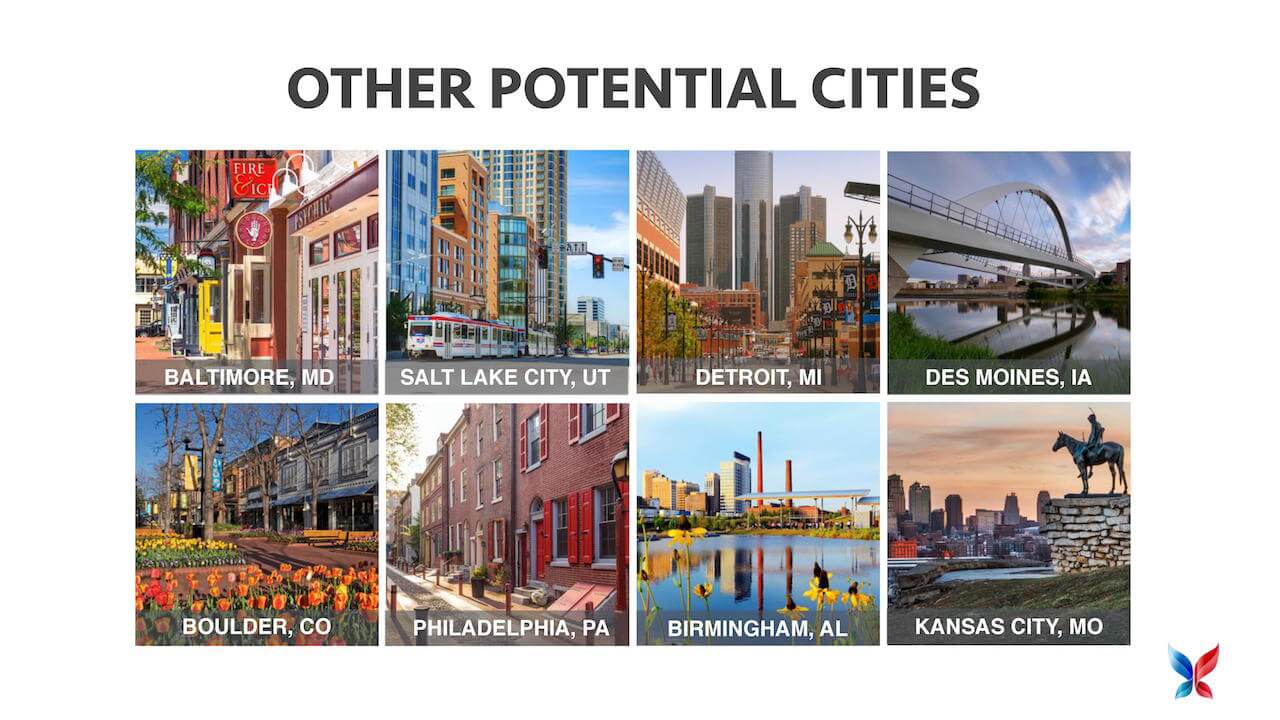 Above: Some potential cities being considered for innovation districts by America Innovates.

While it’s easy to think of America Innovates as yet another effort to create the next Silicon Valley — think Silicon Alley, Silicon Beach, Silicon Prairie, or even the Downtown Project in Las Vegas — this isn’t the  group’s intention. Lu explained that the benchmark is tied to job creation and impact. “Capital alone won’t make this work,” she admitted, which is why America Innovates is working with multiple parties to get it right. The group is looking for cities close to universities that could source talent and is asking questions like whether those cities have a growing real estate market. Lu’s team will also look at the local startup ecosystem and will form relationships within the city government.

Right now, America Innovates is targeting June for the initial launch of its platform. It’ll begin inviting founders in July before bringing on investors in September and formally opening up in beta this October. An innovation district challenge is scheduled to start in 2018.

Chris Noble, Matchfire chief executive and advisor to America Innovates, outlined three criteria that must be met in order for a city to be selected. The first is that the city contains a “healthy intellectual environment in a market.” Does the community possess expertise in genetics, robotics, or another viable field? “It’s a matter of specialization,” he said. “It can’t be [just] because a company is there.” 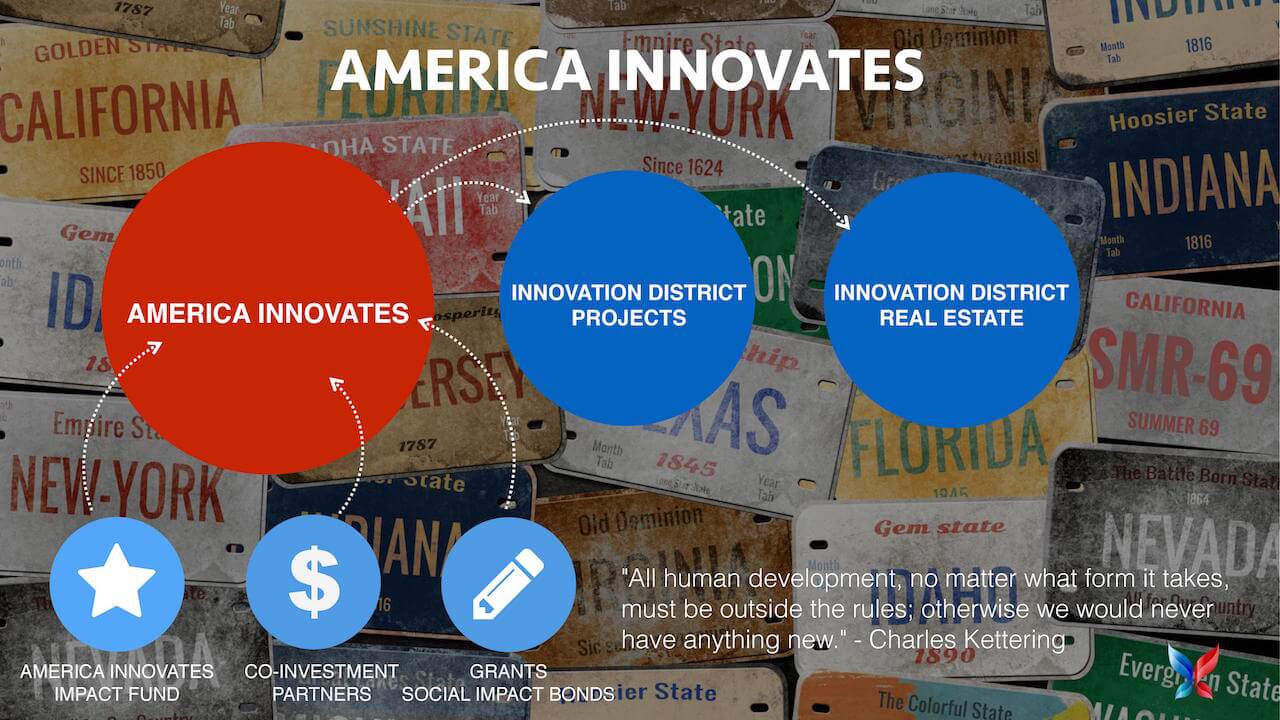 Above: How America Innovates says it works to benefit all.

The next threshold is determining whether the city already has an entrepreneurial climate. If not, how can it foster innovation? Any efforts will remain stagnant without the necessary support and resources. Noble pointed out that places such as Detroit have been convinced that they’re not entrepreneurial, when in fact they are.

Lastly, as it’s a business, America Innovates needs to know that it’s choosing a city where it’ll get the most leverage for its dollars.

More than two years have been spent researching these issues, and no one believes throwing dollars at the problem will result in a quick fix. Instead, Lu’s team is taking a more strategic approach. “You are dealing with technology, real estate, public policy, and socioeconomic challenges,” she said. “That’s not easy, and it’s not overnight. It’s not about making a little [minimum viable product].” 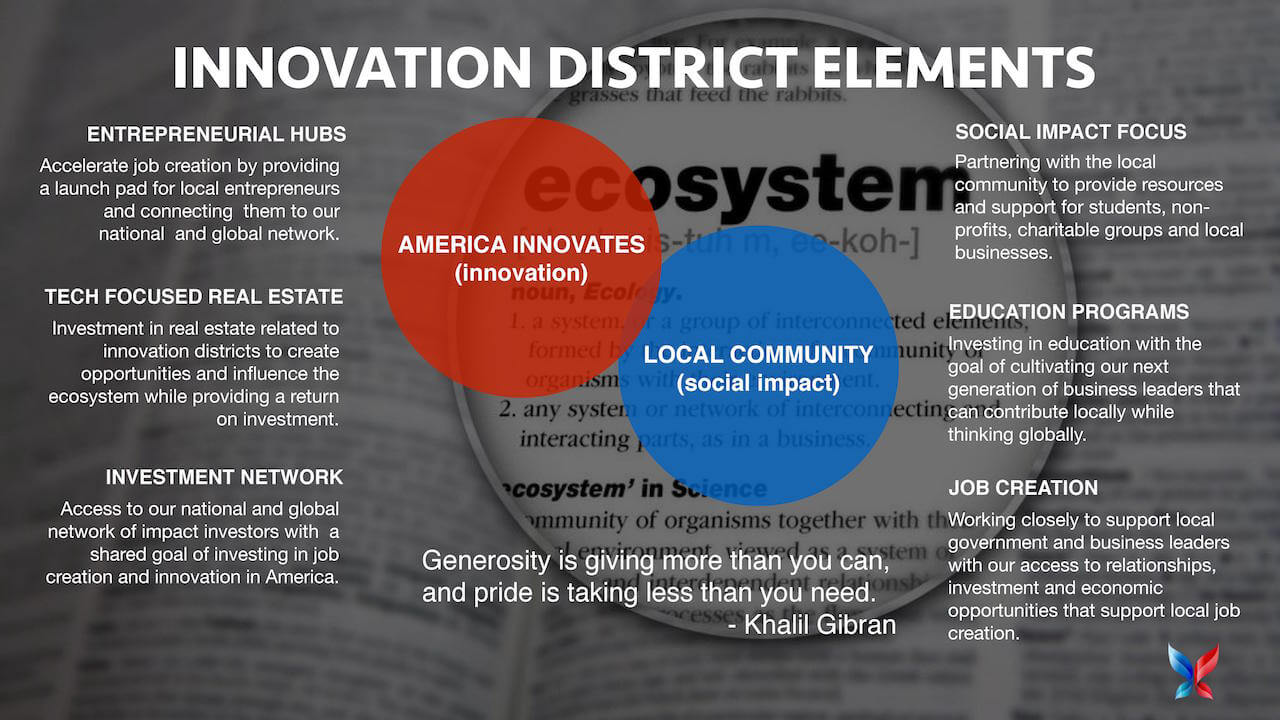 Above: Six elements critical to the success of innovation districts.

America Innovates has identified a total of six key elements needed to make these innovation districts a success. In addition to those that have already been mentioned — entrepreneurial hubs, education, real estate, and job creation — the program looks at social impact, which means partnering with communities to make sure that nonprofits, students, and charitable groups also reap the benefits of these endeavors. Lastly, any action taken requires a strong investment network, something that Lu’s team will bring to the table.

For more than 20 years, Lu has worked with China-based businesses to make investments in the U.S., as well as advising companies on cross-border topics. It’s this experience that led her to start America Innovates, because there was “no shortage of money from China coming in. I saw Chinese money coming into America for real estate that didn’t benefit communities.” Constantly prodded for advice about where investors can put their money, Lu opted to try a fresh approach, one that doesn’t result in more low wage jobs, but will hopefully lead to the creation of better jobs. These will in turn see real estate values increase — a win-win situation.

While she has a penchant for working with Chinese investors, Lu said that this is not the only capital America Innovates is turning to. Right now, the organization has received seed capital for setup and operations, though there’s still more work to be done before the first building is identified and purchased. But the wheels are in motion. “We’re not trying to reinvent the wheel, but accelerate it,” she declared.