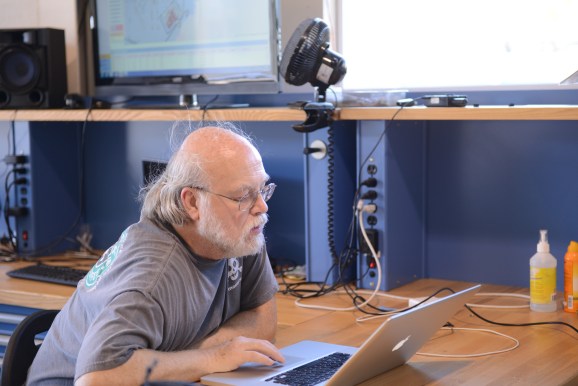 Java founder James Gosling working on a computer in 2013.

Amazon Web Services has added another computer science heavyweight to its employee roster. James Gosling, often referred to as the “Father of Java,” announced on Facebook Monday that he would be joining the cloud provider as a distinguished engineer.

Gosling came up with the original design of Java and implemented its first compiler and virtual machine as part of his work at Sun Microsystems. He left Sun in 2010 after the company was acquired by Oracle, spent a short time at Google, and most recently worked at Liquid Robotics designing software for an underwater robot.

Amazon confirmed that Gosling had joined the company but didn’t offer any further comment on the work he would be doing there. Gosling will join other tech luminaries, including Adrian Cockroft, Swami Sivasubramanian, and Werner Vogels.

While it’s unclear exactly what he’ll be working on, Gosling seems like a natural fit for the teams creating AWS’s tools for the Internet of Things. He’s intimately familiar with the process of deploying IoT systems, as well as the challenges that arise when it comes to using the public cloud with IoT.

“In my case, there are no cloud providers [Liquid Robotics] can use, so we end up rolling our own for everything, which is a real pain,” Gosling said at IP Expo Europe in 2016, when discussing IoT systems. “I mean, a lot of the cloud providers would make my life hugely easier, but convincing [a] random Coast Guard from some random country that they should trust Amazon is really, really hard.”