Today Twitter launched a new way for advertisers to boost their chat experience with Promoted Tweets. Direct Message Cards allow brands to reach users and start an experience with a bot in their Twitter feed. 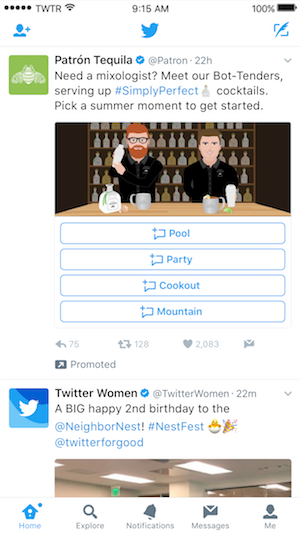 Above: Pátron Tequila Direct Message Card in a Twitter feed

The new feature begins with the Bot-Tender experience from Pátron Tequila. The bot asks a series of questions, like whether you’ll spend the summer next to the pool or in the mountains, then makes cocktail recommendations. Other advertisers are expected to roll out their own chat experiences in people’s Twitter feeds in the weeks to come, Lull said.

In recent weeks, Facebook, Google, and Microsoft have unveiled new ways to find bots on their chat platforms. With Messenger Platform 2.0, Facebook Messenger added more functionality for QR codes, chat extensions that bring bots into group conversations, and a Discover tab for featured or popular bots.

At Build, Microsoft began allowing the 130,000 developers using the Microsoft Bot Framework to publish their bots on the Bing search engine so they come up in search results and can chat directly with businesses on the web. Microsoft also made it possible to find thousands of bots from Facebook Messenger, Slack, Kik, and Telegram in Bing search results if you search “entertainment bot” or “news bot,” for example.

Twitter has been allowing brands to reach customers with automated messages since last fall, when the company debuted welcome messages and quick replies.