Trust isn’t just a warm fuzzy feeling. For companies that know how to add trust to their brand attributes, they can see their work show up in a graph, a trendline, and an upside in performance.

Trusted brands and the stock market

Each year, Fortune magazine releases a list of various business rankings, including the Fortune 100, which many of us rely on as the 100 largest public and privately-held companies in the U.S. ranked according to market cap and valuation.

In 2016, SurveyMonkey sorted the Fortune 100 in a different way: from highest to lowest in terms of consumer “trust” metrics. To follow that thread, my team measured the difference in stock-price performance between the S&P 500 and the Fortune 100 Most Trusted. We thought that there might be a performance difference between those two cohorts. We were right but what we found was even more interesting.

This stock performance happened at the same time that Edelman’s 2016 Trust Barometer showed 50 percent of respondents have lost trust in businesses because of their lack of contributions to “society’s greater good,” and 62 percent of earned-brand respondents said they will not buy from a brand that fails to meet its societal obligations.

And in 2017, it’s not getting any more trustworthy out there. The 2017 Edelman Trust Index reports that customer trust is now “imploding” after a year of “unimaginable upheaval.”

In these politically charged times, consumers now expect corporations and businesses to take a firm stand and act on what they believe in. Conscious Consumers want to know, not just how brands handle their business decisions, but also where they put their socio-political influence. 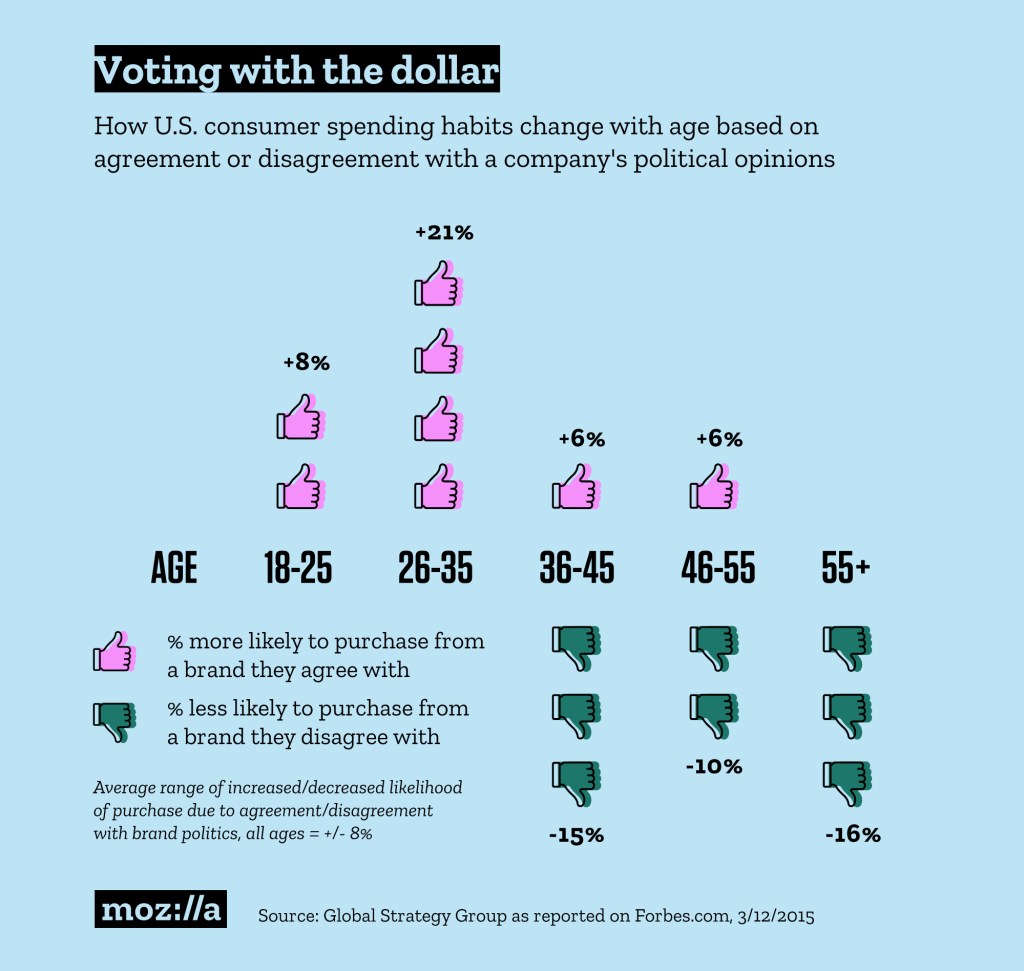 But speaking up on controversial issues has risks. Another study quoted in the same Forbes article says 8.1 percent of Americans are more likely to purchase from a company that shares their opinions and nearly equally, but 8.4 percent are less likely to purchase from a company that doesn’t share their opinions. That’s a big 16 percent swing. But there’s more to this when it’s broken down by age groups.

Middle-aged Americans (36 to 55) are the least likely to consider corporate social advocacy in their purchasing decisions, regardless of whether or not it aligns with their own beliefs. Put simply, when consumers hit their late 30s, they get set in their ways for a few decades.

That’s what we mean when we say Conscious Choosers have a “Millennial mindset.” Their purchase decisions are still expanding and they are exploring to add companies that align with their worldview to their purchase considerations. They haven’t yet settled in their ways or started to withdraw from companies they don’t agree with in the same way as their parents or grandparents.

And there are 750 million of them across the globe. And growing.

The rise of the political brand

The Guardian reported in its “Women In Technology” column in mid-2015, “A third of U.K. consumers claim to be very concerned about issues regarding the origin of products. A study from YouGov and the Global Poverty Project revealed that 74 percent of those surveyed would pay an extra 5 percent for their clothes if there was a guarantee workers were being paid fairly and working in safe conditions.

“If you’re thinking that 5 percent doesn’t sound like a lot, consider the fact that the fashion industry could take a staggering 125 million people out of poverty by adding only 1 percent of its profits to workers’ wages.”

As a connected movement of people that believe in the purpose of things, Conscious Choosers see a world where we can control where we get our food. We can’t fully control water shortages (or floods, for that matter), but we can change how we use water — how we think about water. We can create shelter that minimizes energy costs and toxic materials. Conscious Choosers understand system relationships.

People can shift their individual purchases from unconscious mass consumption to conscious consumerism. When they do, the difference in fair trade opportunities, responsible materials use, and expanded human rights occurs in an interwoven, connected relationship that circles the globe.

And it boosts the consumer, too, because it makes people feel good to make a “good” purchase decision. It gives them a small amount of control over something much larger than themselves, at least conceptually. When these consumers all join in a movement, that’s when they take control on the larger scale.

Conscious Consumers expect brands to take a public stance. They want to hear how the company relates to a particular political value, community, and movement. Perhaps they want to know the brand more like a candidate and worldview they are voting for, rather than a product and features they are buying.

As Jeremiah Owyang wrote in “Rise of the Political Brand”, “A new professional category will emerge: agencies, consultants, authors, speakers will emerge that tie together political and brand strategy that aids the CMO  —  and achieves bottom line growth….

“Brands will politically poll their customers, partners, prospects and competitor base to ascertain the political bent of their constituent base. Some bold brands will publish these polls in public.”

As our political process in the U.S. and elsewhere tears along scored ideological lines, the younger Conscious Consumer segment is only just now beginning to take shape. They are not yet winning (or, apparently, showing up) in the political voting booths, but they are going to start winning in the brand consumer market as they begin to move into their 30s.

Research suggests that we align on trust issues early in our lives, and we manifest that trust in purchases and brand affiliations that continue once established well into our later years. The future of business belongs to brands like Starbucks that can state their purpose and back it up with actions young Conscious Consumers can rally behind.