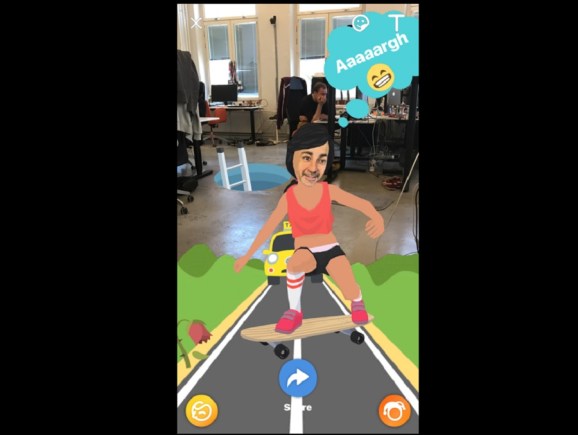 Miso Happy is a new augmented reality app that captures a cartoon version of your face and sticks it on a cartoon character in an AR environment.

The app is the brainchild of Futurefly, a Helsinki-based startup whose mission is to create light-hearted apps that go viral. Miso Happy extracts a 3D version of your face from a selfie, and then the AR app puts your face on animated characters that perform antics in the real world. It’s not so different from putting cat ears on a person in Snapchat, which has proven to be enormously popular.

Available on iOS (with an Android release scheduled for later in 2017), Miso Happy creates a fully animated 3D face after snapping just one front-facing selfie. Users can then select from a collection of animated stickers (that will now have their 3D face on them) and capture photo or video of themselves performing in the real world. Created scenes can be further decorated with 2D stickers and text before sharing on any messaging or social media channels.

You can become anything from a Glam-Rock guitarist to a shy Anime Schoolgirl. Futurefly will add more animated characters, which will appear in the app automatically, without the need of an update.

You can also point your phone’s camera anywhere and capture photo or video of your surroundings, with your animated character performing in it. Users fully control their characters and can position them using pinch, zoom, or rotation on their 3D axis. Miso Happy also lets you decorate captured scenes with 2D stickers and text and allows users to share these creations to SMS, Snapchat, Facebook, Messenger, Instagram, save to the camera roll, and so forth.

Oskari “Ozz” Häkkinen, founder and chief product officer at Futurefly, said in a statement, “Miso Happy has been a super fun, but very challenging project. We’ve been trying to crack the face-tech thing for a while now. With each version we thought we were there, but testers weren’t happy enough with the results. But, we did it finally and managed to solve the challenge of your face in AR, which is essential for content to feel relevant and worth sharing. This is just the start, Miso Happy opens the doors to now do much more in the augmented reality and holographic content space.”