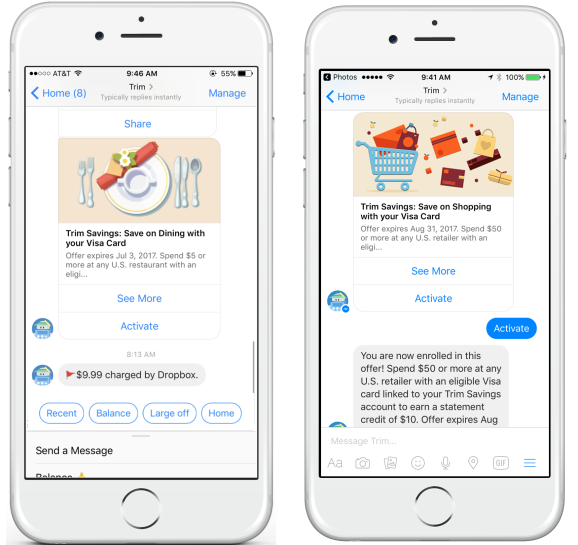 By opting into the program and allowing the company to monitor your purchases, users receive coupons or cash-back rewards shortly after purchases.

The launch deal: Visa promises $1 back for every $5 spent on groceries or eating at any U.S. restaurant and $10 when $50 or more is spent on shopping (excluding delivery services).

Savings are doled out within 5-7 days and will appear inside a Visa cardholder’s statement, according to the Trim website.

Trim first began in early 2016 as a bot that cancels your unwanted subscriptions, a mission that saved users millions of dollars in a matter of months. Since then Trim has gradually added a range of additional features, including services that track your personal finances and renegotiate your Comcast bill while you play Tetris, features that led the bot to grow in popularity.

Trim is a mainstay and the only personal finance bot among the 20 bots listed in the Popular category of the Discover tab.

The Discover tab is a way to find popular bots or speak with customer service agent humans from major businesses added in April to Facebook Messenger. More than one million unique visitors have used Trim since launch, saving people $10 million, according to Smyth.

Alongside credit card companies like MasterCard and American Express and major banks in and outside of the United States, such as Bank of America, Trim is part of bots like Kasisto’s Kai, Varo Money, and Penny, all designed to help people track their personal finances or save money.

“A real pain point for the whole ecosystem is finding real uses cases for bots, and it turns out that if you have a bot that saves people money, people really like it,” said Smyth, who thinks the bot industry should be judged by the bots that create genuine value for users.

“If we’re judging the bot ecosystem, give those a fair shake as opposed to over focusing on the many less useful bots that we’ve seen over the past year and a half,” Smyth added.

Programs like Trim Savings also continue a trend of messaging apps being used to carry out life in the offline world.

Consultant firm iResearch found that last year mobile payment adoption was nearly 50 times greater in China than it is in the United States, equivalent to $5.5 trillion. A recent report found that the use of things like WeChat Pay are changing social habits in China for everyone from the homeless to a bride who recently wore a QR code to her wedding to collect money gifts from reception attendees.

Earlier this year at F8, Facebook Messenger extended its QR codes to allow developers to use them to direct people to a particular messaging experience and built the ability to scan parametric codes directly into the Messenger camera (just hold your thumb down on the screen).