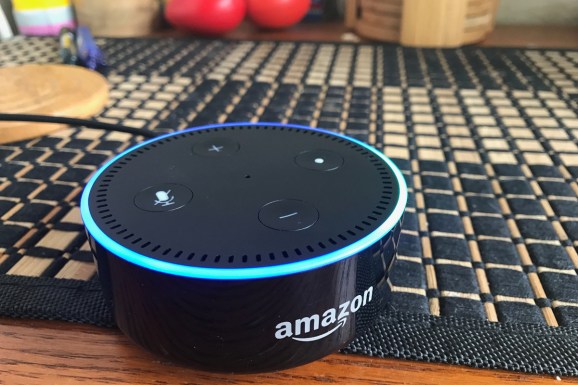 With Apple reportedly moving closer to announcing its rumored Siri Speaker, the question now is whether the tech giant can gain a foothold in a market it has been surprisingly slow to enter.

Being outflanked by Amazon with its Alexa-powered Echo and Dot and Google with its Home gadget seems like a surprising misstep for a company that has defined itself by being able to skate to where the hockey puck is going ahead of the rest of the pack.

They were just the best.

Apple took concepts imagined and pioneered by others and refined them with the right combination of hardware and software to turn them into mass market phenomenons.

Still, it’s not obvious the company can do the same with the Siri Speaker.

According to the latest report from Bloomberg, Apple may announce the gadget at the upcoming Worldwide Developers Conference. Or it may not. Though the Siri Speaker seems to be headed into production later this year in either case.

Bloomberg says the Siri Speaker would allow users to operate Apple’s HomeKit smart home services and other cloud-based services. And it will allow for some third-party integrations. Oddly, the Bloomberg story quotes sources saying that Apple believes its advantage may be the quality of sound from the speakers.

It’s hard to judge without seeing or hearing Apple’s offering, but I’m not sure anyone is buying Home or the Echo because they think they’re the best speakers. Instead, it’s the quality of the voice recognition and reception and the array of services that matter. Someone gave me an Amazon Dot as a gift, and I’m continually amazed by how clearly it can pick up my voice commands and from how far away.

What’s really going to make the difference is the cloud integration, and this is not Apple’s strong suit. At least not yet. Siri was the first voice assistant we knew, but I would argue that Alexa is now the best.

Beyond that, Apple seems to have made several wrong turns on the road to the Siri Speaker.

The company built Siri into the new version of Apple TV a couple of years ago, and the new device can connect to things like HomeKit. But you have to use the Apple remote as a microphone to activate Siri. That’s a pain, compared to the Dot or Echo, which let me just say something from my couch or from across the room.

In any case, the new Apple TV has failed to catch on with consumers and has been steadily losing market share since its introduction.

While I’m sure many would debate me on this, it could be argued that Apple’s focus on its smartwatch was also a distraction. Don’t get me wrong; Apple Watch has done fine. In terms of the smartwatch category, it is the undisputed king. The problem is that the smartwatch market is proving to be far more limited than expected.

In December, eMarketer dramatically cut its forecasts for smartwatch sales, saying that wearables in general just weren’t making inroads with mainstream consumers. The firm said that 39.5 million U.S. comsumers used a wearable device at the end of 2016, far below its 63.7 million forecast.

Looking ahead, eMarketer projects wearable penetration will grow to 21.1 percent by 2020, only a modest increase from the current 15.8 percent.

“Before Apple launched its Watch, fitness trackers dominated the wearables space, and consumer surveys consistently found that tracking health and fitness was the main reason people were interested in wearables,” said eMarketer analyst Cathy Boyle, in the report. “They also reported high price-sensitivity. Without a clear use case for smart watches — which have more features than fitness trackers but significant overlap with smartphone functionality — the more sophisticated, expensive devices have not caught on as quickly as expected.”

By contrast, eMarketer has become extremely bullish about the virtual assistant market.

In a report released last month, eMarketer said 35.6 million Americans use a voice-activated assistant device. That has nearly closed the gap with the number of smartphone users, but with one crucial difference: Virtual assistants are red hot, with the number of users up 128 percent from the previous year.

And eMarketer said that, for the moment, Amazon’s Echo speaker dominates with 70.6 percent of users. Google Home is number two with 23.8 percent.

That is the reality Apple faces this year: A market with two heavy hitters that own almost 95 percent market share, who are investing huge sums in artificial intelligence and cloud computing and who have more extensive infrastructure in both.

Can Apple do it? I certainly wouldn’t bet against it, despite the odds.

Apple’s ecosystem remains a strong force when it comes to attracting and keeping consumers. Compared to Spotify, the company was late with its Apple Music streaming service, but it has still attracted millions of users and continues to grow rapidly.

For the millions who don’t have a virtual assistant but have a home full of Apple products and already use Siri, buying an Apple voice-controlled speaker would seem like a no-brainer.

Of course, much may depend on specifics like price. For me, the new Apple TV is still way too costly. Given that these devices have the potential to super-charge Apple’s services businesses, I would love to see Apple price them close to cost to get users like me to buy in and drive service revenue.

That would be very unlike Apple. The company likes being known as the premium, not the cheap, option. But in a market where it’s going to be the underdog, using un-Apple like tactics may be the company’s best hope for success.