At times, the most ordinary of occurrences leaves a lasting impact. Such was the case when a student, by simply arriving late to an event, transformed how Google, and I, understand the politics of tech in Israel and Palestine.

As Google’s Director of New Business Development at the time, I was hosting a hackathon for 800 software developers in Tel Aviv. Mohammad, a Palestinian student from Ramallah, showed up three hours late. He apologetically explained that he and his seven friends were detained at an Israeli checkpoint. Of the eight, only he was allowed to pass. In that moment I realized that, just by the location of our event, we at Google had effectively chosen sides without meaning to.

That was nearly 10 years ago. Last week, as I found myself in Gaza participating in the AngelHack Global Hackathon Series hosted by Gaza Sky Geeks, I had cause to reflect on the progress we in the tech industry have made on this front and what work still remains to be done.

In the tech sector we often seek to avoid politics, and Israel and Palestine is perhaps the most political matter of all. Yet with activism by tech CEOs on the rise, the landscape is changing, and it has become increasingly untenable for leaders not to take a stand. Even attempts to adhere to the status quo can inadvertently work to deepen inequalities. For example, PayPal is offered to Israeli citizens, including those living in settlements in the occupied West Bank, but is not offered to Palestinians living on the same land. Airbnb lists properties in those settlements as being inside Israel. Palestinian areas are not only missing from maps on Waze, but should one approach a Palestinian town, Waze alerts you to “avoid dangerous areas.” I don’t think these errors are on purpose. In fact, I know they aren’t, because I made the same mistake.

My realization, courtesy of Mohammad’s experience, kicked off a years-long effort by Google to ensure both Israel and Palestine were treated as equally as possible. We did this by launching a Palestinian domain, ensuring “Palestine” was a location on product offerings, and investing in a Palestinian venture capital fund in the West Bank and a startup accelerator in Gaza. Yet they’re not perfect. I recently noticed “Palestine” was not in the list of countries for YouTube sign-ups.

Decisions made in tech often have political consequences, even if that decision is to stay above the fray. Because if the fray is one of inequality, refusing to address it only leads us to replicate it in our work. We must take care not to do this, as it goes against what we stand for and, in Silicon Valley, what we stand for has scalable impact.

With a stagnant peace process, and much talk and little action from President Trump, the reality is that for the foreseeable future, Israel will continue to control territory inhabited by 6.5 million Jews and 6.5 million Christian and Muslim Palestinians. Therefore, in our business dealings, we must recognize all of Israel and Palestine as being territory controlled by one authority and ensure we are not directly or indirectly discriminating against anyone in that territory because of their ethnic or religious identity.

Now more than ever we need to reconsider our response to these issues. Since Trump’s election, many of us feel called to identify and promote our values. We are proud the tech sector has so often stood firmly on the side of diversity, democracy, and dignity for all. We must work to ensure those values are extended to our business dealings around the world, including in Israel and Palestine, where we can make a difference.

Palestinian economic stagnation – Gaza’s unemployment rate is the highest in the world – is a major contributor to the increasing despair of Palestinians. As Palestinian movement and access to resources such as water and land is restricted, tech is one of the few sectors capable of growing as it requires few physical inputs. With our knowledge and resources, Silicon Valley can work to remove obstacles to Palestinian entrepreneurship, strengthen the Palestinian tech sector, and contribute to Palestinian employment and the prospects for a sustainable peace. 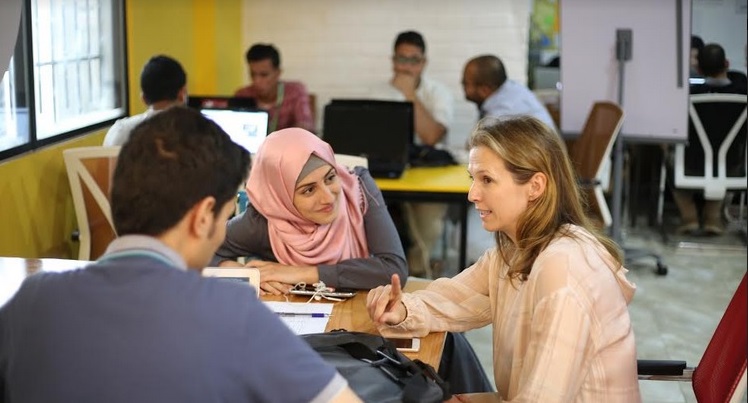 Above: Above: Gisel Kordestani at the AngelHack Global Hackathon Series event in Gaza, May 2017 (photo credit: Hani Mortaja)

Tech has a remarkable ability to transcend borders, and several companies have already been engaging with the Palestinian tech sector. Cisco and Microsoft outsource to the West Bank, while Google, Techstars Foundation, and GitHub offer funding to Palestinian entrepreneurs. In my previous experience at Google, fears that such moves would alienate our Israeli colleagues were pleasantly disproven.

Due to Israel’s prominence in the field, tech companies often have easier access to Israeli perspectives than Palestinian ones. Silicon Valley needs to prioritize getting information from Palestinians when making decisions that affect Palestinians. One simple act to facilitate this is to go to Palestine during regular business trips to Israel. Tech leaders like Dave McClure (500 Startups), Patrick Collison (Stripe), and Craig Newmark (Craigslist) all make a point of visiting Palestine when they travel for work to Israel.

Recently, several technologists and venture capitalists formed a working group to support Palestinian tech initiatives. Its aim is to assist both Palestinian entrepreneurs in connecting with Silicon Valley and tech companies here in learning how to navigate the region. In meeting with and observing the participants of last week’s hackathon in Gaza, I see tremendous potential yearning to be unleashed. As believers in entrepreneurship, we aspire to a world where every young person has the tools to put their ideas into action. We all lose when the world is denied the potential innovation and contributions of an entire population.

Gisel Kordestani is cofounder and COO of Crowdpac and a member of the Council on Foreign Relations. She was previously Director of New Business Development at Google and is on the board of Mercy Corps and Gaza Sky Geeks.