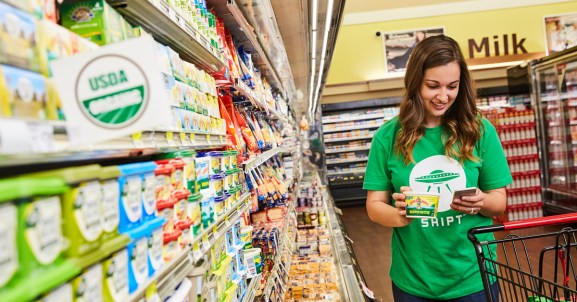 The Birmingham, Alabama-based startup partners with grocery retailers and a community of Shoppers for in-home delivery. Customers must become members to place an order on Shipt, paying $99 per year for free delivery on orders over $35. The elephant in the room here is obviously Shift’s primary competitor, Instacart.

The San Francisco-based giant, which recently raised $400 million in a round led by Sequoia Capital, does not require customers to become paying members to shop via its app. This is a tough act to follow, but Shipt CEO Bill Smith is optimistic: “We want to serve ‘the rest of America’, not just early adopters,” he wrote in an email to VentureBeat. “So our coverage area extends beyond city centers to reach the suburban families that make up many of our core, committed members.”

But Instacart already delivers in 31 states, including Indiana, Illinois, Kentucky, Ohio, and Tennessee.

Although Smith would not share customer numbers, he did disclose that Shipt currently operates in 47 metro areas, with service available to over 20 million homes.

Shipt has raised a total of $65 million since its founding in 2014. The startup plans on using the new capital to continue its national expansion in order to reach more than 60 markets by end of year and 100 markets by this time next year, wrote Smith.

The startup currently has 250 employees.