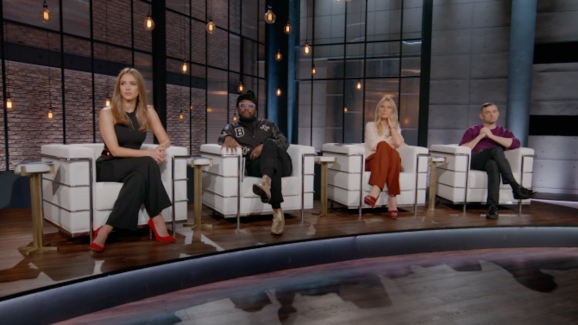 (Left to right): Jessica Alba, will.i.am, Gwyneth Paltrow, and host Gary Vaynerchuk will have to counting the days until the apocalypse.

When Apple first announced it was making a reality show about app developers, I immediately dropped to the floor in a crippling full-body cringe.

It seemed obvious that this was a terrible idea that would result in unspeakable awfulness. But as the months passed, I managed to recover, mainly by pretending this concept had never existed.

Alas, it does. And last night, it debuted on Apple Music. Now, I haven’t watched the first episode because there are not enough forks on the planet to jab into my eyes to get me through it.

But Apple has released a trailer. I watched the trailer.

It has budding entrepreneurs. They will pitch the four advisers. There is something about an escalator and swiping right or left.

It has Gwyneth Paltrow.

“It’s incredibly brave to have the idea to create something,” Paltrow says. “And to come present the app on the show. I don’t think I could do it.”

The show features Will.i.am, Jessica Alba, Paltrow, and ubiquitous internet presence Gary Vaynerchuk as producers and mentors to the gaggle of app developers who will appear. The host is Zane Lowe, the DJ from Down Under who also oversees Apple Music’s Beats 1 radio station.

Hold your children tight, and tell them that you love them.

For the apocalypse is surely upon us.