In-car entertainment systems have become much more sophisticated with the dawn of the connected car. The likes of Spotify are now integrated into many vehicles, and Google recently revealed it’s developing a version of Android that’s specifically for cars and works without the need of a smartphone.

Put simply, cars are fast becoming the new battleground for technology and entertainment companies looking to gain a foothold for their respective services.

One notable omission from current in-car entertainment systems is video — that is, mainstream visual entertainment services hardwired into the very fabric of the vehicle. There are, of course, good reasons for that, one of them being that drivers shouldn’t be distracted while navigating busy thoroughfares. But pay TV network Epix has today provided some details around its video streaming app that’s being integrated into the 2018 Honda Odyssey.

Honda’s upgraded fifth-generation minivan was announced earlier this year, and we already knew all about its on-board infotainment system and 10.2″ rear-entertainment screen that swings down from the roof and is capable of screening content from the car’s built-in Blu-ray player and any device plugged into the HDMI port.

While it is already possible to stream anything you like in any car through a smartphone or tablet, or in some vehicles by tapping the built-in HDMI and USB ports to hook your Chromecast up, a bona fide cable TV network built into the automobile’s fabric represents a minor milestone for the connected car revolution.

MGM-owned Epix is making its slate of subscription-based movies and shows available to those sitting in the second and third rows of the Honda Odyssey, which is perfectly in line with the “family focused” facet of the car. Those hour-long journeys to soccer practice or family road-trips suddenly get a lot easier with the likes of Epix and PBS Kids — which has also been previously announced for the new Honda Odyssey — onboard. 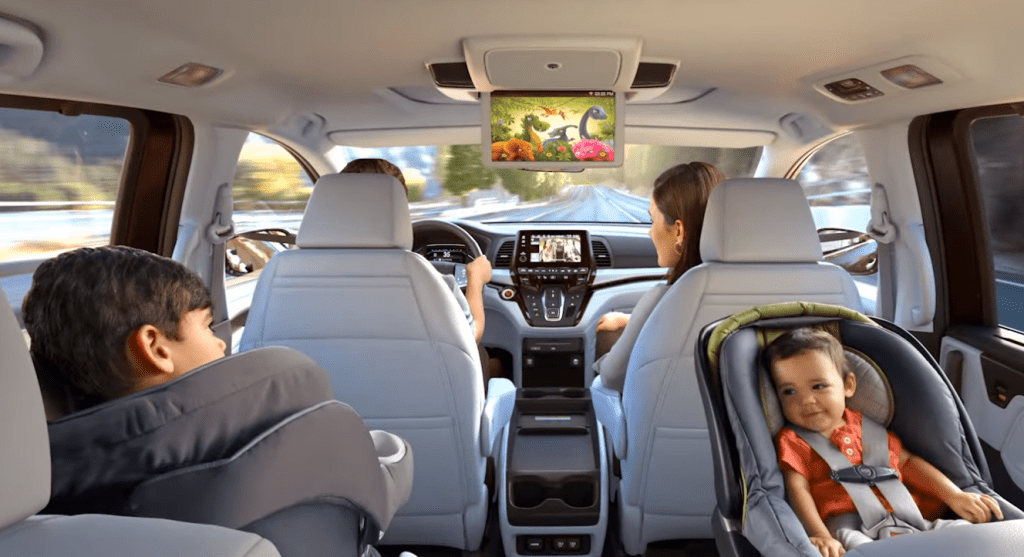 “As vehicles evolve to become the ultimate mobile device, we are pleased to work with Honda to develop new entertainment experiences for second and third-row passengers and pioneer this next chapter of streaming video and true TV everywhere,” noted Epix CEO and president Mark Greenberg.

Honda riders have access to around 2,000 movies and shows from this library, as well as four live linear channels and the ability to “queue” content — this is particularly useful for parents who don’t want to be fiddling around finding new shows to put on while driving at 80 mph. Rear-seat passengers are also able to control their entertainment without relying on those up front.

Additionally, if a driver needs silence, the kids in the back can connect to the system via wireless headphones, or the driver can simply turn off their front-row speakers to minimize the racket. The Honda actually comes with a number of neat new features to enable front-to-back communications, including CabinWatch and CabinTalk, which lets those in the front not only observe rear-based passengers through their dashboard screen but also talk to them through a built-in microphone. Even if the kids in the back are wearing wireless headphones, the audio from the screen is muted whenever the mic is activated.

Moving forward, Epix said that it has a “deep roadmap of innovative features” coming up, including the ability to download content to the Honda entertainment system using “other mobile devices in and out of vehicles,” according to Epix chief digital officer, Jon Dakss. “We’re also tracking the rapid technological advances in the autonomous vehicle space, as we believe they will create extraordinary new ways for people to access premium content while they travel,” he added.

Priced at $10 per month, Epix is available through cable, satellite, and other digital pay TV distributors, and can view viewed on games consoles, smartphones, tablets, smart TVs, set-top boxes, and now connected cars.