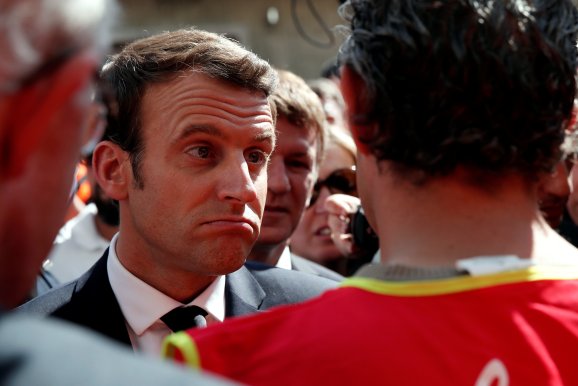 Emmanuel Macron, soon to be French president, reacts while listening to a labour union employee as he arrives at the Verrerie Ouvriere in Albi, France, May 4, 2017.

(Reuters) — French President Emmanuel Macron laid out his vision for a digital future on Thursday, saying he wants France to undergo a revolution so that it becomes a country that “thinks and moves like a startup”.

Speaking at the Viva Technology conference in Paris, Macron repeated he wanted to reform labor laws to give more decision-making powers to companies and lower corporate tax.

The state should act as an enabler — not a constraint — for innovators and entrepreneurs, he said.

The French president said he would limit the wealth tax to cover just property in order to help businesses, and would create a single levy of 30 percent on capital income so as not to scare businesses away.

“When an entrepreneur has too much success, he gets stigmatized and, in general, he gets taxed. This is over!”, Macron told a crowd of start-up founders, investors and students.

“I’m proud of you,” he told the audience, drawing applause.

“Everywhere, women and men want to innovate. France is in the middle of becoming a nation of startups,” he said.

France’s startup scene has been gaining traction, with investment by venture capital funds booming and expectations high for a business-friendly government under Macron, whose “Republic on the Move” (LREM) party looks set for a landslide victory in Sunday’s parliamentary elections.

Bpifrance, the state investment bank which has in effect become France’s number one venture capital fund, told Reuters this week that is increasing its investment pot to 1 billion euros ($1.12 billion).

Macron, who during his campaign promised that 10 billion euros would be invested in innovation, said France needed only to carry out a technological revolution but to transform society as a whole, across all business sectors.

“We will drive through these transformation without delay,” Macron promised. “You do not wait, because your competitors do not wait.”