Cisco today unveiled intent-based networking to deliver security and networking that learns, adapts, and gets smarter over time through the use of artificial intelligence.

“The network has been foundational to business and society for the last 30 years, and today I really believe we’re redefining the network for the next 30 years,” Cisco CEO Chuck Robbins said at an event held today in the Dogpatch neighborhood in San Francisco. “What we believe we can do for our customers is translate their business intent into the network. We can automate policy, we can understand what our customers are trying to do. Think about a manufacturing facility that connects all their assets, and then as they need more capacity then the network dynamically provisions based on what they’re trying to achieve in their business.”

With intent-based networking, AI models are carried out and processes automated inside the Cisco DNA Center, a centralized dashboard for IT teams.

Following the purchase of Catalyst 9000 switches, subscriptions are available either via a la carte components or prebundled Cisco ONE software suites.

The Intuitive Network is being tested with more than 70 customers including Royal Caribbean Cruises and NASA.

While some Catalyst series machines are available today (Catalyst 9300 and 9500), other products announced today will roll out this fall. DNA Center access is scheduled to be released with controlled availability in August. 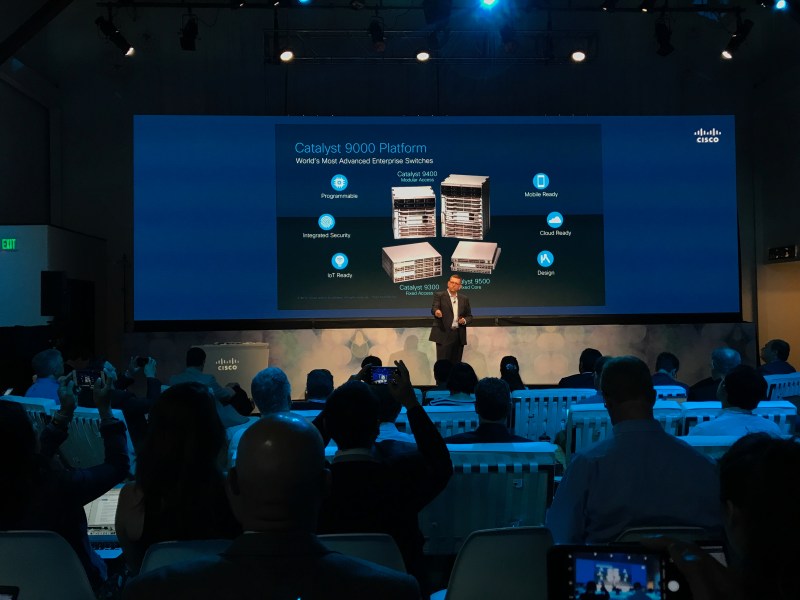 Above: Cisco VP for networking and security business units David Goeckeler unveils the Catalyst 9000 series at an event held June 20, 2017 in the Dogpatch neighborhood of San Francisco.