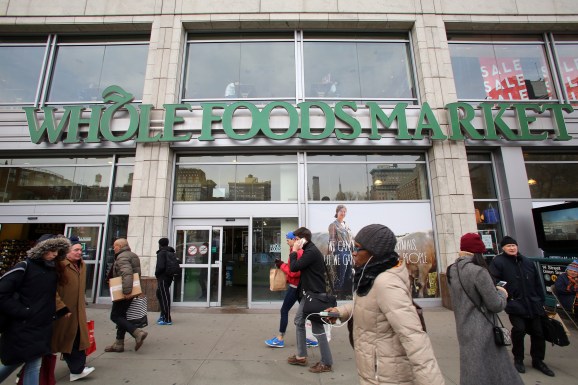 We are entering an era of seismic change — retailers have started to right-size their physical assets (whether those are stores, transportation assets, or other physical capital investments) enabled by the move to cloud computing and the ability to intelligently connect stores, devices, warehouses, and transportation.

Amazon, however, has been moving in the exact opposite direction, albeit cautiously at first: investing in physical distribution and infrastructure, including brick-and-mortar experiments like its consumer electronics pop-ups, baker’s dozen bookstores, and Amazon Go grab-and-go convenience store. With its $13.7 billion Whole Foods acquisition announced late last week, it has now cannonballed into the physical retail world with 465 stores across the country, in a category commonly accepted as key to building customer loyalty. It’s a direct volley at Walmart, whose strategy has long relied on dominance in grocery to maintain its position as the #1 retailer in the world.

Was this a smart investment?

With this acquisition, Amazon certainly acquires a highly regarded brand with a dedicated customer base in a critical category, but it also acquires a lot of expensive suburban real estate. Amazon paid a 27 percent premium for Whole Foods (whose stock price had declined from a high of $65 to $30). Its previous watermark for an acquisition was $1.2 billion in stock for Zappos in 2009.

At face value, this strategy makes sense: “The brand is a good complement to Amazon and would allow them to more aggressively target fresh food delivery to the at-home market,” Darren Tristano, Chief Insights Officer at Technomic, told CNBC. And if that means also delivering an Echo, bestselling novel, diapers, or a new TV with that weekly grocery replenishment, so be it. However, Amazon didn’t need to make this purchase at this price; there are other ways to achieve similar objectives with a strategic partnership instead of a full — expensive — acquisition. Buying a minority stake in WFM, or partnering with it to facilitate last-mile delivery and returns as well as building its fresh grocery business, could be had for a fraction of the cost and a lot less liability.

Buying this heavily into physical retail right now, when all signs point to overdevelopment, also seems a little like skating to where the puck was versus where it will be in terms of retail. It could be perceived as a backwards move. Physical retail is a business Amazon has yet to learn — and now it is responsible for almost 500 locations and the nearly 100k (human) employees on the ground who come with it.

Stretched too thin? A warning from GE

By working to expand Amazon’s scope across so many disparate fronts concurrently, from original entertainment content with Prime Video and Twitch, proprietary hardware devices like the Kindle and Echo, AWS cloud services, its growing logistics network, a potential play for the office with its rumoured eyeing of Slack, and now a major stake in the (literal) ground of physical retail and grocery, is Bezos reincarnating the spirit of GE’s “Neutron Jack”?

For those who may not remember, throughout the ’90s, Jack Welch conglomerated multiple disparate businesses into the new GE, which extended far afield from its core business of power. “Neutron Jack”, as he came to be known, bought and slashed ruthlessly to build a juggernaut that was fueled by GE Capital. The biggest surprise was probably its acquisition of the flagship entertainment property NBCUniversal. Twenty years later, GE has underperformed its peers and has continued shedding assets including NBCUniversal, GE Capital, and maybe more to come. What was originally seen as a diversification strategy is now recognized as a fatal lack of focus, which may also plague Amazon down the road.

In an era where “economies of scale” dominate the retail category, Amazon and Walmart are converging from different directions. As Walmart continues to transform its digital strategy and elevate its brand perception (through Jet, Modcloth, Moosejaw, Bonobos, etc.), Amazon is seeking physical economies of scale. It’s too early to predict the outcome of this deal, but it will come down to how successful Amazon can be at stitching together the back-end of the supply chain to the consumer-facing one, now including Whole Foods.

Amit Sharma is a former Walmart executive and current CEO at Narvar (the retail tech behind Levis, Sephora, Nordstrom and 400+ others). He’s also a frequent contributor to Harvard Business Review.